Note: I’m going to end up breaking this up into two parts: The Facts (Part I) and the Law (Part II).

There are seemingly more lawsuits than professional leagues in the United States right now, but US Soccer is looking to reduce that number by at least one. As I noted in my earlier post, the USSF filed their response to the New York State case filed by the NASL alleging breach of fiduciary duty, by way of a motion dismiss all claims.

If fully successful, the matter would be dismissed entirely, or at minimum put on hold pending the resolution of the federal anti-trust case. If the motion is not successful, we would likely move to the discovery portion of the suit. In these posts, I’ll be looking primarily at the motion filed by the USSF, as well as any of the more interesting supporting documentation, to provide a summary of the USSF position. We’ll have to wait until the NASL files their responsive paperwork to get a better look at the parties’ overall chances.

PART I: THE FACTS

Condescension and sniping, It’s not just for high school any more:

Never let it be said that grown adults can’t resort to passive aggressive sniping, as the opening paragraph of the motion puts into stark relief.

Hoo-kay. This of course provides exactly zero in the way of persuasive or relevant information to the court, and is likely to annoy a judge more than anything. But hey, it’s a catchy opening paragraph. So…great? Let’s move on.

After getting into some background about the role of the USSF, the motion spends quite a bit of time refuting the allegations regarding conflicts of interest in the vote. Interestingly (and I may have missed this), the conflict of interest policy was updated in September 2017, after the vote which stripped the NASL of Division 2 status. 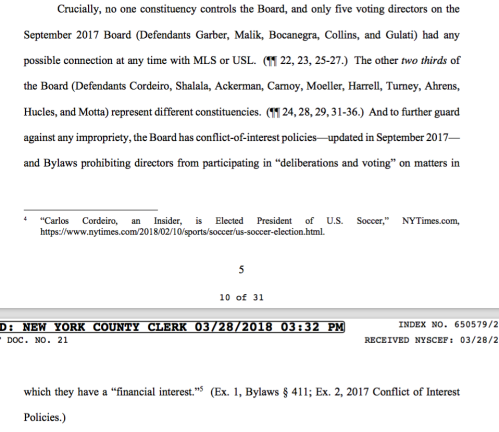 Now, the NASL isn’t claiming that there is some kingpin, lording his/her power over the board, and making all of the decisions; what they are arguing is that there is undue influence (or outright collusion) over the board and its decisions. However, as USSF points out, NASL does not cite any evidence of that (a declaration, an email, a memo), and to the extent there are any conflicts, the policies instituted by the USSF protect against it. At least in the USSF’s eyes they do.

The USSF then engages in a robust defense of the Professional League Standards. Of note, the USSF for some reason engages in an argument that having only one Division 1 league isn’t a bad thing.

Uh, so this seems to be a bit of a straw man. The NASL has never argued that having only one Division 1 league is bad for soccer per se; they’ve argued more that the USSF shouldn’t be (in their eyes) acting to protect MLS. And it’s pretty clear that actively restricting Division 1 to only one league would bring some pretty serious anti-trust issues. So…I’m not sure what the point of bringing that up is. Is the USSF planning to argue that they should be able to restrict Division 1 to a single league?

The oft-maligned Soccer United Marketing, the marketing arm which monetizes the USSF’s properties/rights, has been subject to intense criticism from the NASL, and soccer fans generally. The motion spends a significant amount of time demystifying the organization (or attempting to). Of course, a bit of a shot is taken at the NASL in the process.

An explanation of the marketing agreement with SUM is described, and some financials are disclosed, though they appear to be somewhat cherry-picked and incomplete. And it’s curious why they just won’t disclose the SUM contract in its entirety. I mean, it’s great they’re providing already publicly available statements, but it’s not really what anyone is looking for transparency on. That said, it was interesting to see the payouts as outlined in those early financial statements.

Now, if we could just get the documents from 2017, when the SUM agreement was officially renewed.

To some extent, this issue has been discussed Ad infinitum, so I’m not going to spend too much time on it here, but there are a couple of things I’d like to point out, based on the following portion of the motion:

Having laid out some of the background, the USSF then focuses what they see is double-dipping of Costanzian proportions. After losing their motion for a preliminary injunction, and while awaiting a ruling on their appeal, the USSF argues that the NASL decided to file the New York state case, even though the USSF says they could have included these claims in the federal anti-trust suit.

Pretty straight-forward here. At first glance, the double-dipping claim would seem to have some resonance, but to really determine that, we’ll have to look at the law, and how the USSF makes their arguments. We’ll look at that in Part II.