Note: You can read Part I here.

Continuing the discussion on the U.S. Soccer Federation’s motion to dismiss the complaint filed by the North American Soccer League in New York alleging breach of fiduciary duty, I left off summarizing what the USSF had to say about the facts alleged in that case. We’ll focus on the law in this story. Also note, I’m not a New York attorney, so this will be a general analysis of the law used the USSF’s case. I have reviewed most of the relevant New York statutory framework related to not-for-profit corporations…I don’t recommend it unless you’re getting paid to do so.

Four Arguments and a Summary:

The USSF argument breaks down into to four basic points, and they’re actually relatively easy to follow (at least to start). 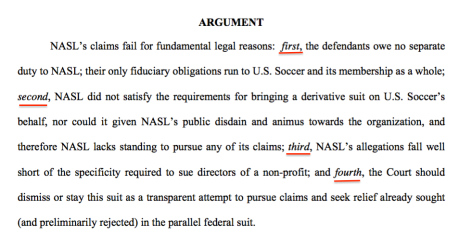 So these are technical arguments; there won’t be a whole lot of discussion on the underlying facts/allegations per se (see Part I for that). Essentially, the USSF is arguing as to the first three points, that even if you accept everything the NASL has said is true, they have not cleared the hurdles required to survive the motion to dismiss. As to the fourth argument, that goes more to the “double dipping” argument briefly referenced in Part I, which I’ll expand upon later. So let’s take each of these arguments on.

Argument: Defendants Do Not Owe a Fiduciary Duty to NASL as a Matter of Law

We start off with the USSF arguing what is a simple premise: You can’t breach a fiduciary duty to an individual member, when the duty is to the whole organization. In this case, the “organization” is the membership of US Soccer. USSF frames it thusly:

Of course, NASL is (or was) a member of the USSF, so one would think that board members have a duty to treat them the same as everyone else. And that sounds intuitively correct. After all, similarly situated members it would seem should get the same treatment. Like two Division II applicants, for example. Interestingly, the USSF seems to be floating out an argument that they *can* treat different members differently if it “would promote soccer or benefit U.S. Soccer as a whole.” Something to look out for there. In any case, there are very specific laws in the area of not-for-profit corporations, and to prove their case, the NASL must prove each of the following elements:

When talking about the breach of  “duty” the USSF points out that NASL mainly talks about how *they* were harmed, and not the corporation (US Soccer) as a whole. What USSF glosses over is that NASL’s allegation is that the directors (unscrupulously) took actions that damaged NASL, and thereby assisted other members (possibly intentionally), in this case MLS and USL. Now as the USSF has previously pointed out, the evidence on those allegations is thin. Additionally, USSF argues that merely exercising its discretion that just happens to damage a particular member, does not cause a breach of fiduciary duty. 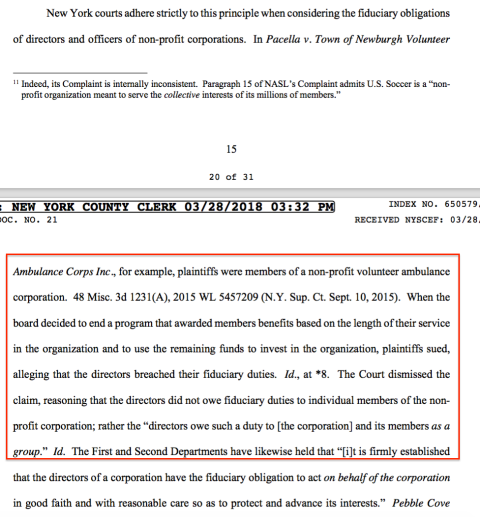 Now, that premise seems very sound, but I’m not sure the example is completely on point. In the case that was cited, it was a decision about how the corporation allocated its funds to members; here, we’re dealing with a sanctioning decision. In theory, there are limitless leagues that could qualify for, in this case, Division 2 sanctioning. Or any division level for that matter.

There are finite funds available to a particular organization, so decisions have to be made as to how money is allocated. Here we’re dealing with the nebulous concept of “sanctioning,” and the benefits it confers. USL isn’t getting any funding from the USSF as a result of their Division 2 sanctioning. MLS isn’t getting…any…funds, you’re going to bring up Soccer United Marketing now, aren’t you? Let’s just leave that alone for right now.

The USSF spends much of its time on this issue arguing about discretion and decision-making, and how it would be impossible to function as a not-for-profit, were they not able to make these types of decisions. 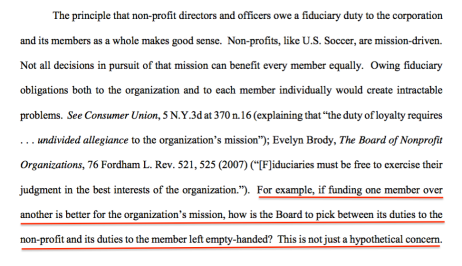 They’re right; it isn’t just a hypothetical concern, and allowing members of a NPC to sue because they weren’t granted funding for a trip to Chicago or Los Angeles would make a mockery of the nature of those organizations. I’m just not sure (for the reasons listed above) this argument is analogous to the situation we’re dealing with, and you can bet NASL will contrast the situations in their responsive argument. To be fair to the USSF, this analysis is somewhat superficial, and it’s absolutely possible the court will not find a major difference between the two sets of facts (can you place a monetary value on “sanctioning?”). But something to keep in mind.

This is a hyper-technical argument. Essentially, in NASL’s complaint, there is a request that indemnification as to the defendants be denied. If granted, any damages awarded could attach personally to those found liable, as well as said defendants being responsible for paying fees related to their personal defenses (attorneys fees). The USSF’s argument essentially says that in a case such as this, NASL either needs to demand the Board sue, or they need to follow certain other statutory requirements. But what NASL can’t do (USSF argues) is sue on behalf of the USSF to order indemnification be rescinded. 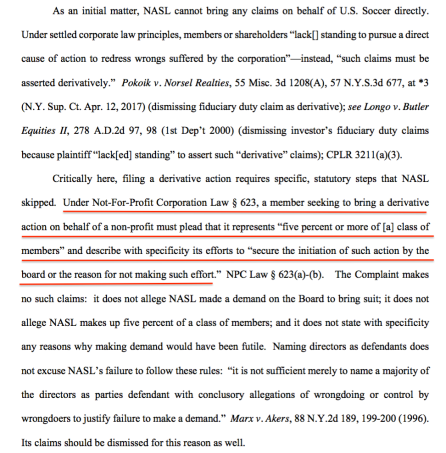 As I said, hyper-technical. As to the issue of naming the Board as defendants, I’d note that those were the members that allegedly engaged in the wrongdoing by denying Division 2 sanctioning, so I think the allegations are a bit more specific than the USSF is saying. However, we’re still (at this point) lacking much evidence of specific wrong doing in the decision-making process itself.

And following up on that, USSF then argues that even if NASL was the property party to bring the so-called “derivative suit,” they are hopelessly conflicted, due to the alleged animosity they’ve displayed towards the USSF, both in previous legal filings, as well as in public comments. 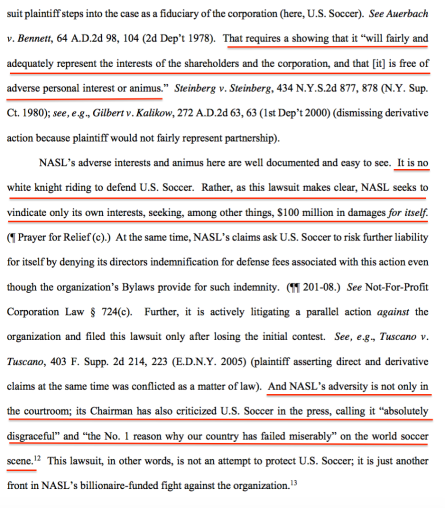 See, this is why you don’t let your clients appear on every media outlet, going on stream-of-consciousness rants. I previously had a go at Don Garber and Sunil Gulati for this same thing, and now the comments of the plaintiffs are potentially going to come back to bite them in this suit. Client control: it’s a thing.

Argument: NASL Has Failed to State a Claim Against the Defendants

We’re back on somewhat less technical ground here, with the USSF essentially arguing that the NASL has not pleaded its claims with enough specificity. Now of course in any complaint, not every single allegation or fact is going to be known ahead of filing the case, but there is a basic level of specificity that needs to included. Here, the USSF argues that the NASL needs to meet an even heightened standard, because the board members are unpaid volunteers. 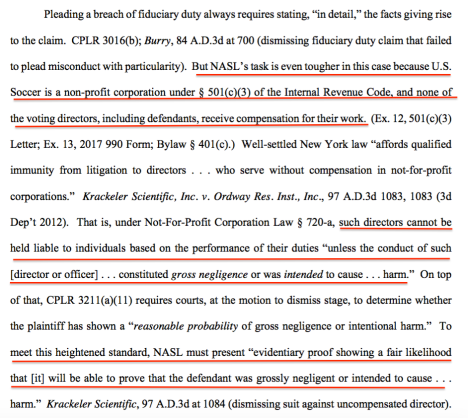 So a few things here. 1) Obviously, the allegation from the NASL is that the actions of the directors *did* constitute gross negligence, or was intended to cause harm (and protect more favored members), but 2) the issue as always is whether there is proof to substantiate these claims, and 3) if the heightened standard is used, that will make the NASL’s case much more difficult, as the USSF points out:

Interestingly, USSF seems prepared to concede (for purposes of this motion) that some members may have been unprepared or overly deferential to other directors, but argues that does not meet the standard of “grossly negligent” or “reckless disregard.” 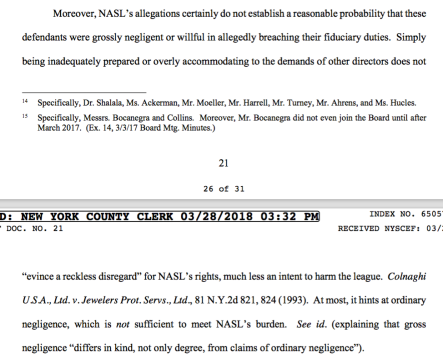 This would seem to be something that would only be able to be determined after a fact-finding, either through interviews, depositions, testimony, or other evidence that the parties may have. And one man’s negligence is another man’s reckless disregard. Again, the problem here right now is that the information that NASL has presented to this point may not be enough to meet this standard. Of course, NASL may have more specific evidence that they are planning to use going forward.

Finally, the USSF spends a significant amount of time defending four defendants: Gulati, Garber, Steve Malik (North Carolina FC/Courage owner), and Dan Flynn (CEO of U.S. Soccer), while noting that they did not participate in the vote that de-sanctioned the NASL, and that there is no evidence that any of them did anything to influence the vote. 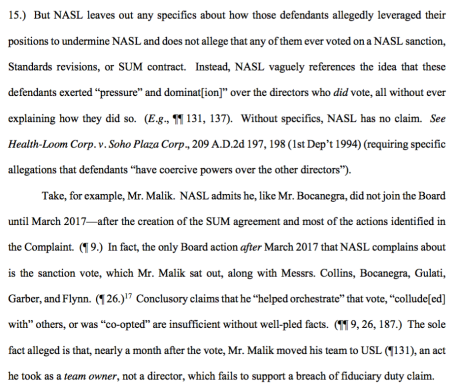 In summary, according to the USSF, there is simply not enough specificity to sustain this claim, especially if a heightened standard is applied; what NASL has at best shown are some inferences that maybe can be drawn, and even that is dubious. With folks like Mr. Bocanegra, having joined so late, it makes it less likely (though not impossible) that he was involved in any wrongdoing, and either way, we haven’t seen anything yet to show that he was involved in that type of activity. One thing I could see happening is that certain causes of action against certain individuals may be dismissed, pending additional information/evidence that implicates them.

Argument: This Court Should Dismiss the Case as Duplicative of NASL’s Federal Lawsuit or, at a Minimum, Impose a Stay.

The final argument provides a backstop in the event that the court were to consider NASL’s complaint sufficient to continue the suit. As the argument goes, since a case essentially involving the same parties is already being argued in federal court, either dismiss this one, or wait until the federal anti-trust case is over. It’s pretty straightforward actually: the subject matter is essentially the same, the parties are (basically) the same, and the requests for relief are similar. 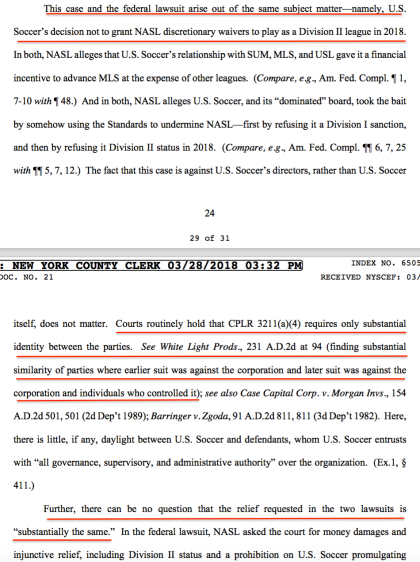 Honestly, this argument seems pretty sound to me on its face. And I’ve seen courts get out from under cases on less technical arguments than this. But I don’t practice in New York, so I’m not going to presume to know how a judge in that jurisdiction would rule on this particular issue without doing a bit more research.