I suppose I’d be remiss if I didn’t have a brief comment on the news of the day. That came in the form of a motion filed by the State of […]

I suppose I’d be remiss if I didn’t have a brief comment on the news of the day. That came in the form of a motion filed by the State of Ohio to toll the so-called “six month waiting period” required by the Modell law, during which time local buyers are to have the ability to make an offer to purchase the Columbus Crew. Again, I’m going to set aside issues regarding the validity of the law itself; that will hash itself out as the lawsuit continues. For purposes of this discussion, why are the Plaintiffs doing this now?

The answer is actually pretty simple. From their perspective, something fishy is going on, and they suspect (probably rightly) that Anthony Precourt and MLS are about to pull a big play. It all goes back to the letter sent by PSV/MLS to the City on March 6. I’ve gone over that at length, so I won’t go over the letter itself again here. But there is a reason my ears perked up when I saw PSV/MLS reference those October/November ’17 dates, and it obviously didn’t escape the plaintiffs’ attention either: 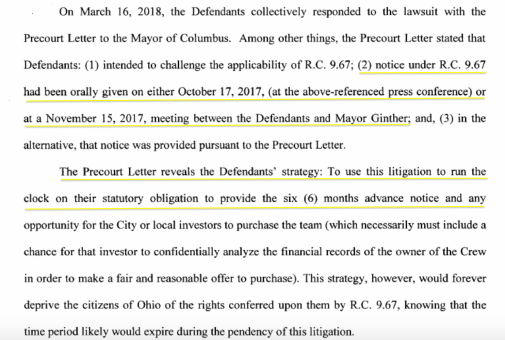 I’m focusing only on the October/November dates, because as I previously noted, if either of those dates are affirmed as the official “notice” date, we are days (April 17) or weeks (May 16) from the six-month period expiring. Which would, if we follow the PSV/MLS presumed argument to its logical conclusion, preclude the application of the Modell law entirely.

So that gives us an answer as to why this filing was submitted today. If granted, that six-month period would be put on hold for some amount of time, to be determined by the court (or stipulation of the parties). It could be for weeks/months; it could be until the lawsuit is finished. My guess is it is possible we’ll have an emergency hearing scheduled here shortly. It’s also possible that the court could wait to decide on this issue and apply its ruling retroactively, but I can’t imagine that the plaintiffs want to mess around with that kind of thing, if they can help it.

As to the merits of the argument, I’m going to do a bit more research on the issue tonight and tomorrow if I have the time. Maybe I’ll do some reading as I make my way over to Sonarfeed to make an appearance on the podcast. (Note: It’s a Sounders-focused podcast, so we won’t be discussing #SaveTheCrew for the entire 90 minutes. But hopefully you’ll be entertained.)

Anyway, off to prepare for the show and read some case-law!