You can read Part I here.

You can read Part II here.

We are roughly about a week out before the U.S. Soccer Federation and Major League Soccer have to respond to the (amended) NASL anti-trust suit. That is likely to take the form of a motion to dismiss the case. That motion was put on hold, pending the resolution of NASL’s request for a preliminary injunction. When that was request was denied, and then denied on appeal, the parties agreed to the aforementioned schedule to get the case moving again. With that in mind, I provided some analysis of the NASL’s amended complaint in two parts (above). I promised part III shortly thereafter, but hey, life and other stories pushed that back. But this seems as good a time as any to dive back in before the fireworks begin next week.

The above summarizes the position of NASL fairly clearly, but in order to prove their case, NASL needs more that mere allegations of a conspiracy. So what are we looking at?

The anti-matter to NASL’s matter; the Vince McMahon to NASL’s Stone Cold Steve Austin (stay with me here), Soccer United Marketing is the tie the binds NASL’s animus towards MLS the USSF broadly. Started in the early 2000s, when both the USSF and MLS were floundering financially, SUM was created so as to market the rights of domestic soccer and provide some stability for all parties. NASL describes the relationship thusly:

The thing is, I don’t think broadly speaking, that the USSF or MLS have really disputed this characterization (setting aside the incest claims). Both Don Garber and Sunil Gulati have defended the relationship, with Garber going on at length to defend what SUM does.

We’ll come back to that quote in a moment. Now to be fair, new USSF President Carlos Cordeiro has expressed concerns about potential conflicts. So how does the SUM arrangement create a conspiracy, if at all.

The “motive” if you will, as is usually the case in these matters is financial. What NASL alleges is that the arrangement between the parties essentially provides USSF with the lifeblood it needs to survive and fulfill its mission.

If that looks familiar, it should, since NASL has used Don Garber’s own words against him. So a couple of things here: 1) It’s amazing that these parties continue to blabber publicly about this case, when they know that the other party is likely to use those comments in the case-in-chief against them. 2) It’s important to note that the district court has already held that such agreements on their face do not constitute a conspiracy, especially if proper conflict protocols are put into place. Still, it is certainly probative evidence in this case, as NASL explains:

So I think it’s fair for NASL to argue that the agreement provides incentive for the USSF as an organization to ensure that MLS is as strong as possible, as those large payments do provide the federation with a substantial amount of revenue to fulfill their mission statement. But does that provide sufficient incentive for the USSF to favor MLS at the *expense* of other leagues? If there are sufficient safeguards in place by way of conflict of interest policies-and the district court found preliminarily they’re sufficient-NASL is going to need to come up with additional evidence.

Deal or no Deal:

Where the NASL ultimately failed in their quest for a preliminary injunction, and where they’ll need to do more if they want to prevail in the case-in-chief, is to establish the agreement between the USSF and MLS to restrain them through the relationship with SUM and the alleged discriminatory implementation of the Professional League Standards. Now, evidence of the agreement doesn’t have to be Dr. Evil-style video of the villains laughing as they document their deeds. NASL will likely need more than they’ve shown so far. Much of what has been pled so far goes to explaining just how close the parties are: 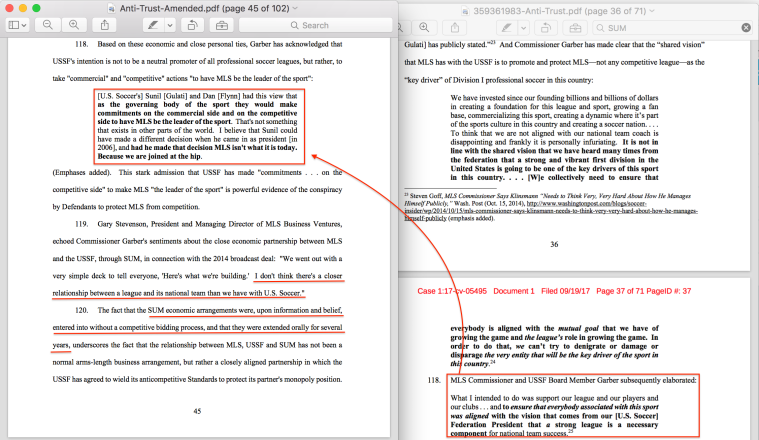 Is it just me, or does Don Garber say a lot of things that end up being used in lawsuits against him? Now maybe I’m just picking on him, but if I were his attorney, I’d really advise against him talking, well, ever.

That said, I think we get it: NASL has established that MLS and USSF have a very close relationship. And that their financial interests are intertwined. But how does that explain the conspiracy, and where is the agreement and action to initiate it.

The PLS, NASL argues effectively acted as the instrument for MLS and the USSF to restrict their ability to grow as a league. I discussed the PLS at length in Part II, so I’m not going to get into them here. The main point here is that NASL is arguing that the course of repeatedly amending the PLS, and discriminatory regulation thereof significantly damaged NASL as a league.

As proof of the USSF’s intent to handcuff the NASL, they cite the implementation of the amended 2014 PLS, and the attempt about a year later to further amend the PLS to make them more stringent: 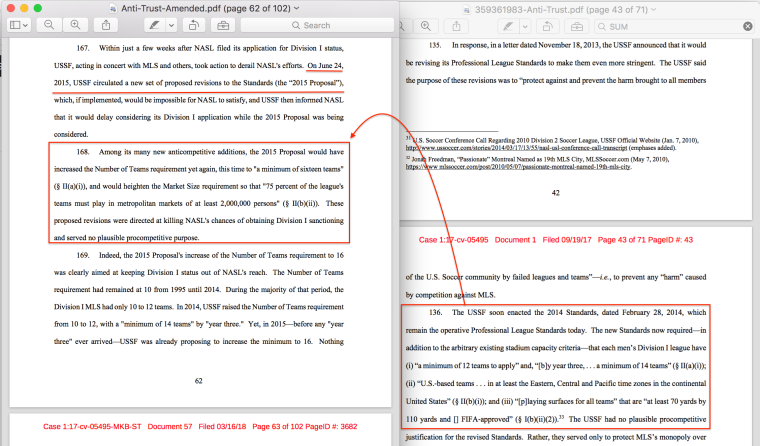 Now, the attempt to modify the PLS in 2015, a year after previously modifying them (when the last modification took place in 2008) looks VERY suspicious. The court during the argument over the preliminary injunction found it concerning as well:

But it should be noted that in spite of this, the District Court judge decided not to grant the preliminary injunction, mainly because in spite of these questions, she couldn’t quite connect the dots. Now that was in the context of the request for an injunction, which carried a much higher standard due to the relief that the NASL was requesting. So it’s possible that at a trial with a lower burden of proof, NASL may be able to get this issue over the line. Or at minimum, survive the USSF’s motion to dismiss, which would allow them to begin the discovery process.

The other issue as to the conspiracy is not only the increasing of the requirements under the PLS, but their discriminatory application of them by the USSF, which allegedly began at the end of 2016, and accelerated through 2018: 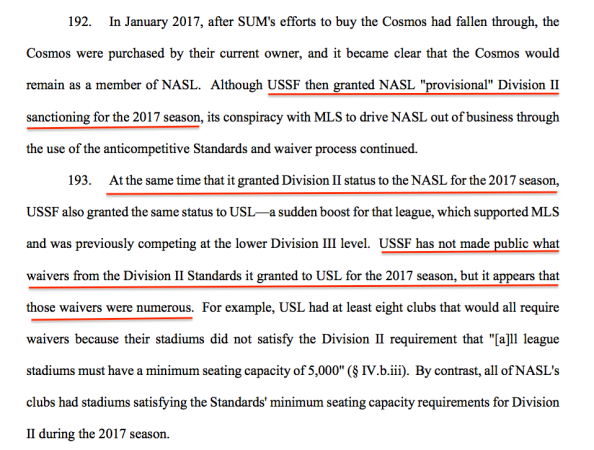 So a few things about this: 1) It wasn’t a surprise that USL was angling for Division II; they’d long made those ambitions known. 2) It should be noted that initially it was the USSF Task Force recommendation that *neither* USL nor NASL be sanctioned Division II for the 2017 season. 3) It’s absolutely true that we have yet to see what waivers have been requested by USL for either the 2017 or 2018 season. Or for any season ever, for that matter. Or for MLS, even. With that in mind, what does NASL say was the discriminatory treatment between the two leagues? 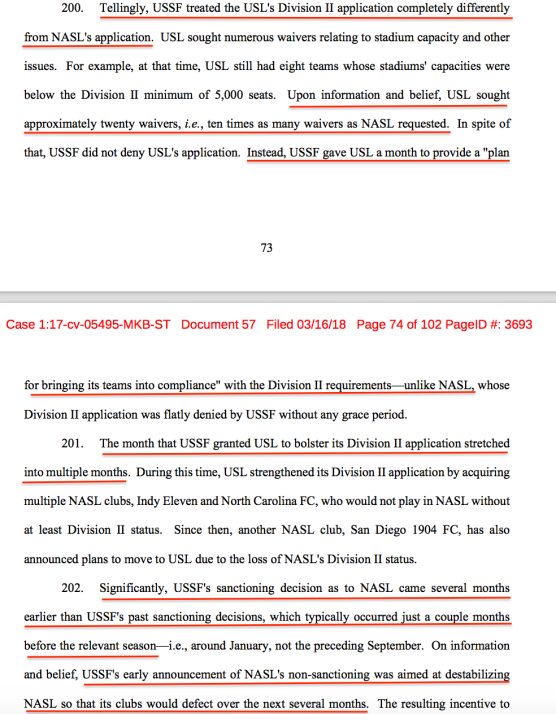 So again, a few things about this portion of the amended complaint: 1) As former USSF President Sunil Gulati points out in his declaration (assuming it’s accurate), the waivers USL requested were team-waivers related to coaching licenses and field dimensions; not number of teams in the league. 2) NASL is absolutely correct that their application was flatly denied, and they were not given a chance to correct any issues (Gulati effectively argues that NASL was a lost cause). 3) USL was in fact initially given a month (September-October 2017) to come into compliance, and they weren’t granted full Division II status until January 2018. 4) And it’s also true that USL now has two years to make sure they are fully compliant with Division II standards. I’m not sure if this is enough to establish a conspiracy to discriminate against NASL in favor of USL, but there is this inflammatory allegation from the NASL pleading:

Yikes. I actually have a feeling I know who made this statement, but I can’t say for sure without doing a bit more digging. In any case, one presumes that NASL knows both who made the statement and who heard it, and is likely saving this little sugar plum for later. Whether this was someone who was simply spouting off, or was evincing a more sinister motive, it’s not a smart statement to make.

So has NASL established the conspiracy to violate the anti-trust act? I’m not sure based on their pleadings. We still seem to be lacking the agreement, though again, you do not necessarily need video evidence, or a voice mail or a memo. But you need more than just the financial relationship between the parties too. This is really important in the context of what the USSF does next, since NASL’s next goal is to survive the motion from them to dismiss the case outright. Whatever other evidence is out there, NASL won’t get the chance to look at it if the matter goes away. On April 20, we’ll get a look at how USSF plans to fight the case going forward.