The State of (Washington Versus) Hope Solo: Part I

This is a story I’ve been waiting to write for long time. A long, long time. The documentation and legal pleadings have been nigh impossible to track down online, which made writing the story from a legal perspective quite difficult. I’m not particularly interested in rehashing the facts of the alleged assault; you can read the police report here if you want. Oral arguments on the appeal to the Supreme Court of Washington are now set for May 31. If Solo is successful in her appeal, the matter would likely be dismissed. If not, the case will be remanded back to Kirkland Municipal Court, where the prosecutor will presumably bring the matter to trial.

Before I get started, I’ll say this about the case: I’ll be surprised if this matter ever goes to trial, whether it’s dismissed at this stage or not. I’m a former prosecutor in the Pierce County Domestic Violence division, and I did public defense work for years involving domestic violence cases. I still take the occasional DV case. This isn’t a domestic violence case in the way we usually think about it (though it legally qualifies for sure). It doesn’t involve intimate partners or a scorned paramour. Or even parents and children, for that matter. It amounts to, if you give Solo’s account any credence, a family brawl. And maybe not even that.

It’s not the type of case I likely would have expected a prosecutor dedicate their limited time/resources to, save for a few things. 1) It’s a high-profile athlete, who at the time had a penchant for…2) questionable decisions, and 3) allegedly wasn’t particularly nice to the police officers investigating the case. I could add, 4) based on my limited experience with, and what people I talked to at the time told me, the City of Kirkland prosecutor had a reputation for not wanting to “deal” cases, and taking a hardline stance. Add all that up, and you get a case that is *still* going after nearly four years, and if it is remanded back for trial, could take another 6-12 months to get to trial.

This isn’t to say that simply because a case doesn’t involve “intimate partners” that domestic violence issues are not at play, but looking at the relationship of the parties involved, it still is surprising to me that this case wasn’t (quietly) disposed of years ago. Solo has long since moved on from playing soccer, and has gotten involved in the politics of the sport, running for President of U.S. Soccer. The alleged victim-nephew in the case is around 21 now. I’m left to wonder what either side hopes to accomplish here in the way of justice, so far after the alleged incident.

Okay, I’m off my soapbox. Let’s get to procedural meat of the matter. This story will likely be broken up into two (maybe three) parts. The pleadings in this case, though many of the documents overlap, are around 600 (!) pages. Also, I’m going to use “Solo” when referring to the defendant, as that is the name she uses for publicity purposes, though her legal last name is “Stevens.” We’ll start with a procedural/factual background.

In June 2014 (again, this incident happened basically *four years ago*), Solo was arrested for allegedly assaulting her half-sister and (then under-age) nephew. Solo entered a plea of not-guilty and the case then proceeded on its normal trial track, with Solo requesting witness interviews/depositions prior to trial. Around November 2014, the complications began, with the alleged victims refusing to comply with interview requests. That forced Solo to file requests for depositions, which were scheduled. Things basically went downhill from there. Citing from the Court of Appeals. 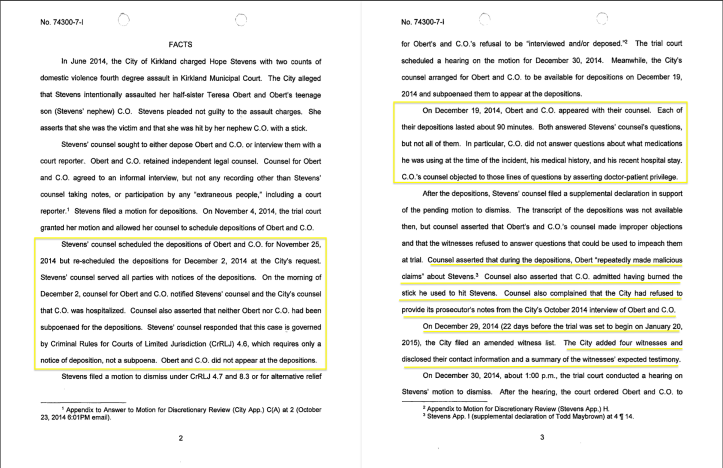 At that point, things really went south, as the alleged victims continued to refuse to cooperate, and the witnesses added by the City refused to submit to interviews, which means that since the trial was set for January 20, 2015, and speedy trial expired February 2, 2015, Solo had to choose between hearing from witnesses for the first time at trial (which would compromise her right to effective assistance of counsel) or waiving her right to a speedy trial. The municipal court judge at that point had enough, and dismissed the charges.

The ruling was then appealed by the City to King County Superior Court (KCSC), arguing that the municipal cause abused its discretion when dismissing the case under CrRLJ 8.3(b). The Superior Court agreed with the City.

So you can already see where the first point of conflict on appeal was going to be; whether the actions by the City constitute gross mismanagement, arbitrary action or willful violation. The “prejudice to the defendant” prong seems to be well established. The KCSC found the actions (or inaction) by the City didn’t constitute a violation under CrRLJ 8.3(b). Citing from the oral arguments from KCSC:

Now the defense for Solo focused on the argument that the municipal court judge *did* make a finding of gross misconduct; they simply didn’t formalize with a written findings of fact (though the court did ask the City if they wanted a written findings, and the City declined). But it seems to me this rested on the KCSC judge simply not believing that what the City did violated CrRLJ 8.3 or CrRLJ 4.7, and believing that there were other remedies available to the municipal court, such as striking witnesses from testifying. Of course, striking witnesses from testifying may have had the same effect as dismissal, but since outright dismissal prior to trial is a “last resort” remedy, the courts are essentially instructed to try every other remedy before that one.

So then we get to the court of appeals, where Solo petitioned the court for discretionary review of the KCSC decision. There were four basic prongs upon which Solo could petition the court.

The Court of Appeals looked at arguments (1), (3) and (4) for purposes of this appeal. Unfortunately for Solo, her arguments were basically dismissed by the Court. 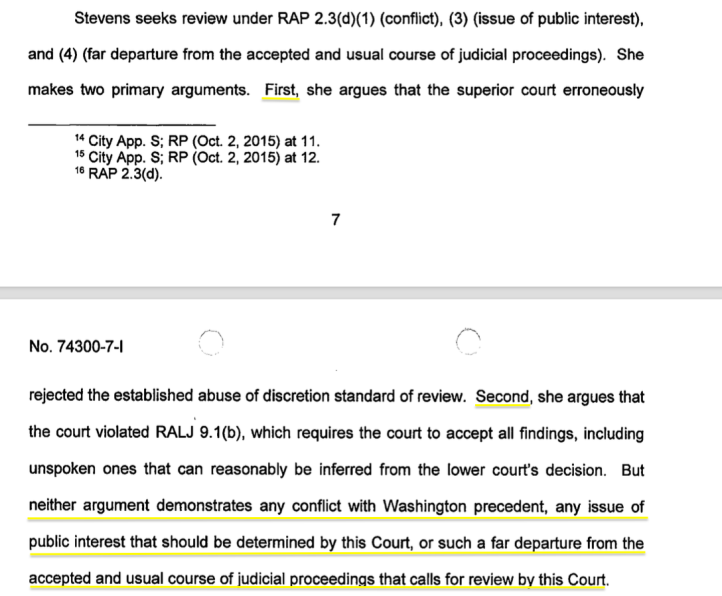 The court considered whether the KCSC decision conflicted with any other cases on the record regarding misconduct or willful action. After chiding Solo for raising those issues in her reply brief (a no-no), the court finds no conflict in the decision, distinguishing the action by the City here from the cases cited by Solo: State v. Brooks (failing to provide *volumes* of discovery until right before trial) and State v. Michielli (adding multiple new charges days before trial). Both matters were dismissed for governmental misconduct, and after reading the summaries, you can understand why.

Having found that those cases are not analogous to what happened in Solo’s case proved fatal on appeal, as that shows no conflict in the KCSC decision to remand.

The court essentially skips over this prong, simply concluding that Solo did not raise any issue which justifies reversal of the KCSC based on “public interest.” We’ll address this in part II of the story, because Solo certainly does in her appeal to the Supreme Court.

Finally, the court dismisses Solo’s argument that the ruling by the KCSC constituted a substantial departure from accepted judicial practice. The court here essentially finds that at most, Solo has established “legal error” in finding that the City did not engage in gross mismanagement, which does not meet the standard required here.

I’ll have to say for a court that allegedly was not “fixated” on the lack of written findings and conclusions, the transcript of the hearing with the KCSC does focus on that issue. The question why KCSC didn’t remand the matter to have written findings is basically answered by the fact that KCSC thought it would be pointless, since KCSC didn’t think the municipal court had established gross mismanagement, or even could. In any case, the Appeals Court agreed with KCSC, and remanded the matter for trial, not even agreeing to modify the ruling at the request of Solo (the City of Kirkland didn’t even bother to respond).

So this is essentially it for the background of the case. In the next part, I’m going to analyze the Supreme Court briefing. There is a lot to look at, so stay tuned.