Note: This will be a series I’m doing on lease agreements between local municipalities and MLS franchises. You can review some background on the issue here.

The recently renamed “SeatGeek Stadium” is home to the Chicago Fire of Major League Soccer. The stadium opened in 2006 with the Fire being the main tenant. Located in Bridgeview, the stadium location has been a point of concern for years. Limited mass-transportation options from Chicago proper, along with sparse pre/post-game entertainment options around the stadium (the Wikipedia page hilariously/sadly states, “[i]n 2015, a Circle K convenience store and Shell gas station opened at the east end of the stadium’s parking lot, accessible from Harlem Avenue.”) have conspired (along with a middling team performance on the field) to decimate the attendance/relevance of the team in the Chicago market.

Taylor Twellman several years ago on a MLS broadcast named Chicago as the number-one concern for MLS, and it’s not hard to understand why. From MLS’ perspective, you can’t have the number three market completely irrelevant locally and nationally. So what about the stadium itself?

The location was selected in the mid-2000s, before MLS realized the demographics for its fans (and soccer generally) skewed young and urban, and the focus was on suburban soccer moms/families. Its core fanbase now is more likely to live in urban areas, and prefers (as young folks do) to have drinks before/after the games and have transit options to get there. At the time though, MLS teams didn’t have a choice, so they took what deals they could get, and low-cost/free and suburbia was where is was at, so there we go.

Of course, after the incidents of team relocations, municipalities began to get wise, and started adding protections for themselves. Some have resorted to statutory language, but most have begun adding provisions to the lease agreements to restrict the ability of the teams accepting public assistance to relocate during the term outlined in the lease. Bridgeview is one such municipality which opted for the latter option. 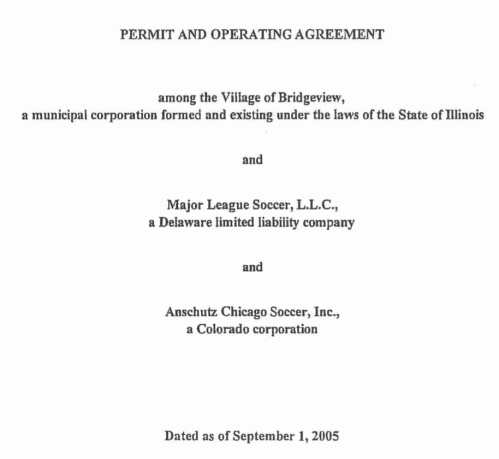 The opening of the lease is pretty standard, listing the parties to be bound to the agreement. Of course Andrew Hauptman along with his wife (through their company) purchased the team in 2007 for $35 million, though that doesn’t affect the lease.

So let’s get into the nuts and bolts of this lease:

So how long is this lease for, exactly? Assuming there have not been any extensions (and I can’t imagine there would be), the Fire have until 2037 by my calculations before this lease is up.

Since the opening was in June 2006, the thirtieth anniversary of the “Contract Year” would be 2036, with the last day being December 31. So the earliest the Fire could move would be 2037, essentially. So…just under 20 years to go.

Since the Fire are locked into this long (long) term lease, the next question many are probably asking is about the prospects of a potential relocation. While there is no chance that MLS would move out the Chicago market, they’d probably like to move into the city proper. So what does the lease say about that?

Not much maneuvering room there. The only exception is if the attendance is sufficiently awful as to make a game there financially non-viable, OR if another location provides a drastic boost in revenue. Under the former, the Fire have to get the Village’s permission; under the latter, the Fire can play the game without permission, but have to revenue share.

So what if MLS wants to put another team in the area? The lease has that covered.

You may be thinking, “can they could get around that by placing the team far from Bridgeview, but still in Chicago?” The answer to that would be a “hard no.”

Another thought by some is that if the team prospects are so dire, perhaps MLS should just contract them and reopen them under other management, a la Chivas USA/LAFC. Not so fast.

Normally I’d question the legal viability of such a clause, were it included by local ordinance or statute, but since MLS agreed to the terms, they’re bound by them. Someone should give the Bridgeview lawyers a raise.

Incredibly, in the event that the Fire are no longer a part of MLS, but are still a professional soccer team, they *still* have to play their games there.

Granted at that point, the Fire probably cease to exist, but what an incredible clause to put in there.

So I think we’ve established the iron-clad nature of this lease. So, you may think, “big deal. The Fire are probably making a pretty penny operating there, especially since the stadium didn’t cost them anything to build.” Well…

SIDE JOBS; OR, OTHER EVENTS

Based on my reading of this lease, the Village has the sole responsibility of booking non-MLS events.

It gets even worse (or better, depending on your point of view), since aside from five dates, once the MLS schedule is set, all other dates are released to the Village for event scheduling.

This even goes down to the scheduling of the ancillary facilities, such that the only restriction on the Village is allowing time for team practices and meetings, and even then the Village has some oversight.

I must be reading the next section wrong, because based on the wording, the Village has exclusive rights to sell all premium club seating for all events?

Based on my reading, the only way the Fire get their hands on premium seats and suites is if the Village can’t sell them. 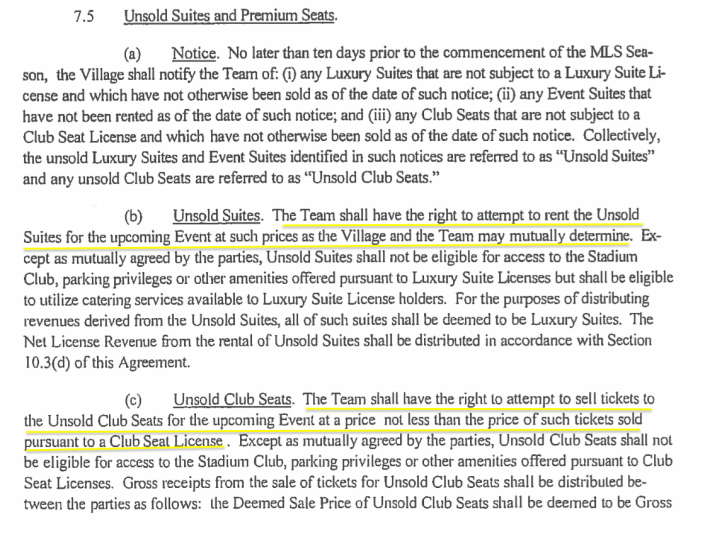 If this lease couldn’t get any worse for the Fire, the Village controls all revenue related to the stadium naming rights. Though they do provide a “commission” to the Fire if the team locks in the deal.

I can’t imagine that amounts to very much, especially if you consider the time and expense in securing said naming rights. There are various other commissions that are awarded to the team for securing sponsorship rights on behalf of the Village.

Who knows if the juice is worth the squeeze, but I suppose every cent counts in a situation like this.

We finally get to the breakdown of revenue sharing for the various revenue sources associated with this lease. I’m not a financial analyst, so I can’t say if these numbers line up with others in the industry. But here they are. 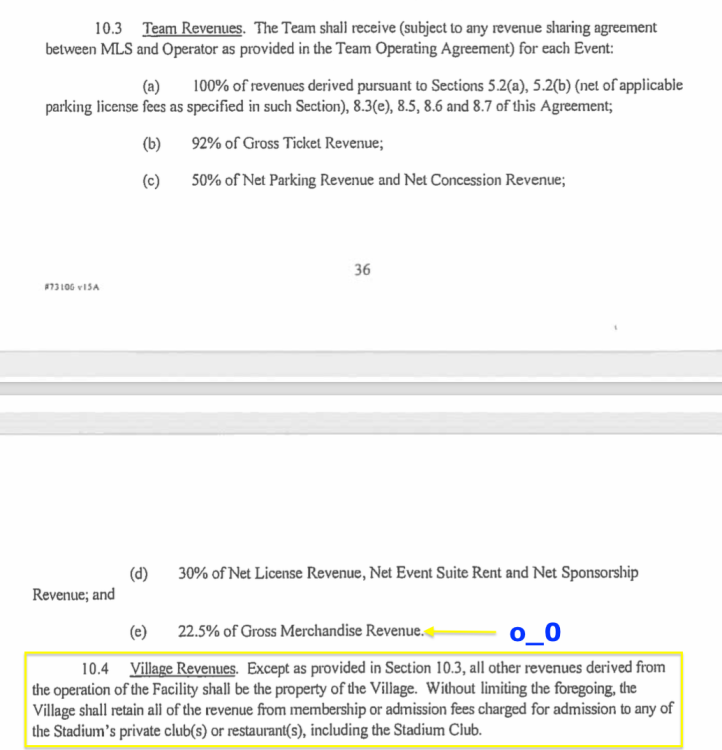 Insane they are having to split merchandise revenue, and at that rate besides.

Given the nature of the deal, what if MLS/Fire just decided, “to hell with it” and decided to breach the contract, by moving the team or moving another franchise into the City proper. It…wouldn’t go well for them. Aside from the usual financial damages and attorneys fees, there is this provision.

So in the event that the Fire/MLS tried to move the team, or bring another team into Chicago, not only can Bridgeview obtain an injunction, they can obtain an order to force the Fire/MLS to perform under the lease, and the Fire/MLS waive a defense that monetary damages would be sufficient to resolve the matter. Goodness.

There are other things in this lease, but I think everyone gets the idea. It also may (I stress may) explain this latest news about a USL team starting in Chicago. Given the airtight nature of this lease, short of a catastrophic event, the only way to get the Fire out of Bridgeview, AND get a MLS team in Chicago proper, is to come to an agreement with Bridgeview. In light of the financial issues that are ongoing in Bridgeview, it is certainly possible; nothing prevents the parties from mutually terminating/amending the agreement. If the price is right.