I had a feeling this was coming. Nothing about the action of defendants has indicated they were going to play particularly nice. In this case, PSV/MLS have decided that the […]

I had a feeling this was coming. Nothing about the action of defendants has indicated they were going to play particularly nice. In this case, PSV/MLS have decided that the ruling (which I understand came as a shock to them, and left them very upset) is a bridge too far. We now have confirmation that they have filed a notice of appeal to the 10th District Court of Appeals in Ohio. 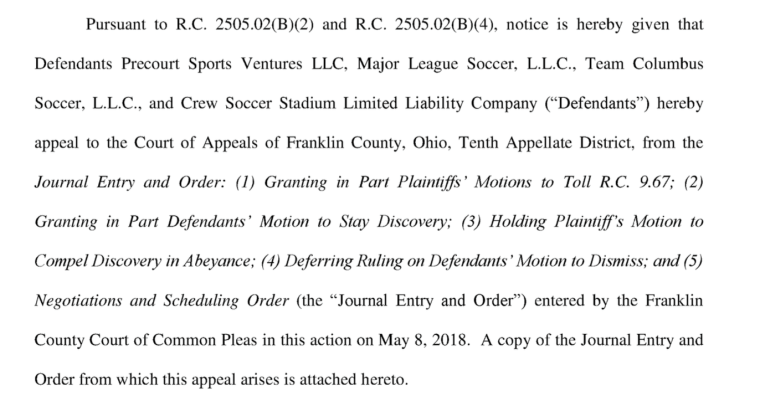 The two points they are arguing: 1) The judge erred in granting the six-month tolling period and 2) Setting up a procedure for allowing bona fide purchasers to make offers (and by extension ordering a process for discovery) mandates compliance with ORC 9.67, which the defendants argue is unconstitutional.

The briefing on this issue isn’t due until 15 days after the notice is sent (guessing appellants will take all of that time), so I can’t really analyze their reasoning yet. However, the judge’s ruling on point “I” was based on equitable factors:

So we can image how PSV/MLS will handle that. On point “II,” expect an appeal to be centered on arguing that there is no statutory basis to set up the process the judge did to handle a potential sale of the team. 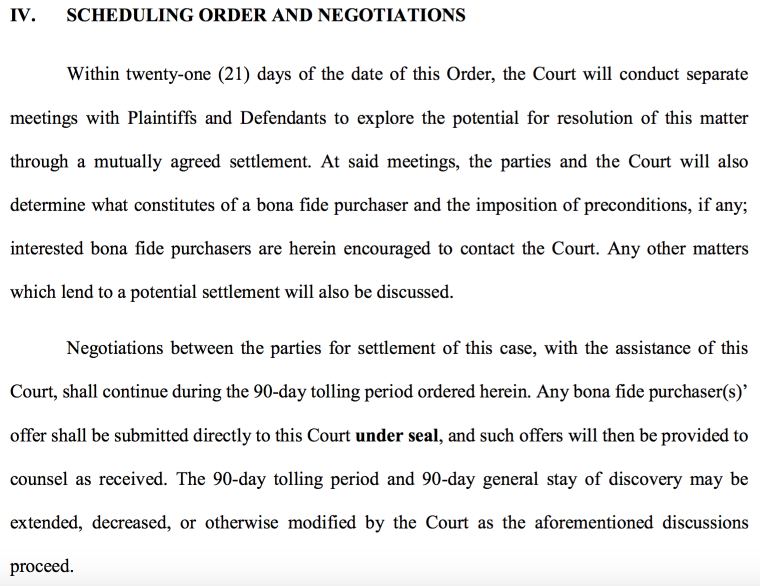 Procedurally, PSV/MLS may run into some issues. This appears not be a final appealable order as defined by the Ohio local rules, which is what you need to appeal generally. That doesn’t stop PSV/MLS from making the argument of course, but I’m not seeing a statutory basis for this appeal, especially given the grounds upon which they are appealing. The only real crack in the door is based on a “provisional remedy,” and I don’t see that the ruling here by Judge Brown qualifies, unless PSV/MLS are going to argue that in effect, he granted a preliminary injunction. Which I suppose is possible.

The options available to appellees (plaintiffs) seem to range from fighting this on the merits to moving to dismiss the matter.

As to what the plaintiffs do while fighting all this…good question. My guess is that they ask Judge Brown for an extension of the tolling period (is a toll of a toll a thing?), assuming that PSV/MLS are not going to comply with the original order pending this appeal. A full-on preliminary injunction could be sought I suppose, but given that Judge Brown reserved the right to modify this order in just about every way, that doesn’t seem particularly necessary.