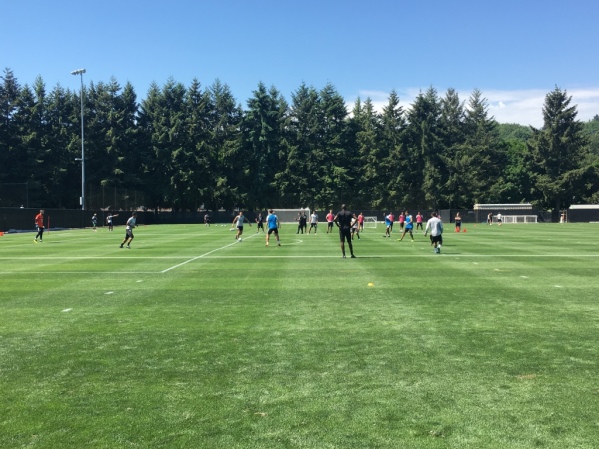 It’s annoying to have client meetings cancelled at the last-minute, but my loss is also my gain, as it enabled me to go outside and head back down to Starfire to check out another Sounders practice. Not a cloud in this sky and 70+ degree temperatures isn’t a bad way to spend a mid-day.

First off, we had some additions to the practice. Sounders 2 signees Felix Chenkam and Nick Hinds were practicing with the first team. Both were fully involved in training (both score some nice goals during one of the drills). I have no idea if one or both are close to signing 1st team contracts; it could have just as easily been to give them a taste of more high-level training. Alas, there was no press availability today, so no chance to ask Coach Schmetzer about it. 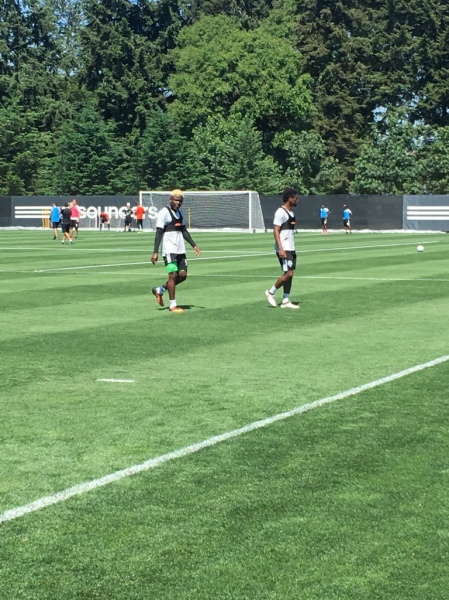 Also joining the team today was injured forward Jordan Morris. I believe this is the second time he’s been outside with the team since his surgery. He obviously isn’t close to returning, but he was doing various drills designed to strengthen his lower body I’m assuming. Good to see him out there without any braces or other support for his surgically repaired knee.

In other injury news, Will Bruin, Victor Rodriguez and Ozzie Alonso continue their paths to recovery. Bruin was doing a bit more than yesterday, and Victor and Ozzie continue to make progress. As Coach Schmetzer previously said, we’re still probably in “minor miracle” territory to expect Bruin to play this week, but there are still a few more days until the game.

Beyond that, it was a pretty intense practice and even then Schmetzer had to yell at some of the players to get off of the field afterwards. Hopefully that intensity pays off this weekend.

After practice, Morris and the Roldan brothers stuck around for an interview, during which they spent most of the time taunting each other. Entertaining to no end.

Lastly, the whole brain trust was here, discussing what I assume* are final plans to bring Luis Suarez into the team at the beginning of the Summer Transfer Window. In all seriousness, I’m formulating a long-form story idea, so hopefully I’ll have the opportunity to interview them later this summer. Anyway, that’s it from practice; hopefully everyone gets a chance to enjoy the great weather.