A nice overcast day met us at Starfire (and frankly, that was fine with me) for the last practice before the Sounders take on Real Salt Lake tomorrow at 2:00 p.m., and the Sounders it appears have some help for their depleted ranks. Pending receipt of his paperwork from USL, the Sounders have signed 19-year-old forward Felix Chenkam from Sounders 2. As the signing isn’t official, no terms were released (though they usually aren’t in any case).

The Sounders also noted that Chenkam will take an international roster slot, but a Sounders official confirmed to me that it will not impact any potential summer signings. Whether that means that someone else is on the verge of getting a green card, that the Sounders have a trade lined up to obtain an international slot, or they’re going to sign someone who doesn’t need an international slot is not clear. But they aren’t worried about it in the least, based on what I heard. Assuming the paperwork is received in time and processed, Chenkam would be eligible to play for the Sounders tomorrow versus RSL. Coach Schmetzer noted that this was a big opportunity for Chenkam, given the depth at forward, and as such this was a chance for him to make a name for himself.

Chenkam was obviously happy for the opportunity, and noted the signing came as a “total surprise” to him. He had been training with the first team all week, and the Sounders front office had been out as well, so maybe we should have seen it coming, in light of the injuries the 1st team was dealing with.

On that note (by way of clever segue), the three main injured players continue to make progress. Will Bruin was doing quite a bit of work on the side, but wasn’t involved in training itself. Both Victor Rodriguez and Ozzie Alonso were much the same, so it’s good to see all three of them getting closer. Whether that means any will feature this weekend, I can’t say.

Aside from that, it was a lively practice; there were about five Sounders 2 players up training with the first team, including David Estrada and Nick Hinds. There were various Sounders alumni out observing practice, including Kasey Keller, Steve Zakuani and Marcus Hahnemann. All that’s left is to wait for game-time tomorrow. Enjoy your weekend! 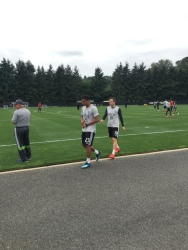 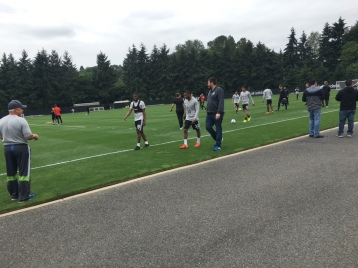 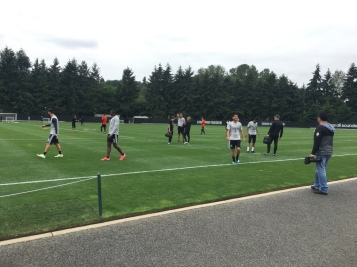