The weather may have been overcast, but the mood around the team was bright, as the Sounders continue to work their way towards full (relative) heath. Sure, Jordan Morris is […]

The weather may have been overcast, but the mood around the team was bright, as the Sounders continue to work their way towards full (relative) heath. Sure, Jordan Morris is still out for the year, and Handwalla Bwana suffered an unfortunate injury, but Victor Rodriguez working his way towards full fitness, and Ozzie Alonso training, there is at least a light at the end of the injury tunnel.

To that end, the team cheerfully welcomed back Nicolás Lodeiro back to the team, where he immediately began training. Whatever the injury issues were, they appear to be behind him, and the team was eager to put those issues past them, and look forward to the game tomorrow.

You could tell there was a sense of urgency around the team, as Will Bruin, Christian Roldan and Brian Schmetzer all spoke to the need to put on a good performance at home and get three points. There was an understanding that the situation isn’t good, but I’d also say there was a quiet confidence that the team can turn things around, if they can get healthy.

Just watching training, you could tell that the team looks entirely different with both Nico and Victor on the field. As Coach Schmetzer noted, there is a dynamism to their play,  given their quality on the ball and ability to get forward. Again, if the team can get healthy, the team that was in training may be able to turn things around. 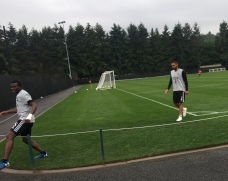