Okay, that’s not a real day (and let us hope it never is). But the USSF has finally released its Audited Statement for FY 2017. In that includes an “explanation” of the financials of the 2016 Copa América Centenario. It’s about as clear as mud, especially if you’re not an accountant (and I surely am not). Interestingly, USSF has admitted to some errors in their accounting and thus have “restated” some of their financial declarations around the 2016 event.

Curious also about the “deferred revenue” and how that relates to these (and future) filings.

We also get a restatement of the SUM guarantees afforded to the USSF.

We’ve long since known about the numbers in total; it’s more the accounting behind those numbers most have been interested in. Unfortunately, there isn’t much light that is shed here; perhaps those things will be “discovered” in the future. And it was previously disclosed (in court filings) that the SUM agreement ends in 2022, though there was a period that the agreement was being enforced through some sort of ad hoc “handshake” basis. Interestingly the SUM agreement was formalized AFTER USSF as sued by NASL. But what’s this about a 2018 agreement being formalized? That doesn’t line up with the following:

The NIKE agreement provides its own source of revenue (as noted above).

Not much else to say here; this is a long-standing relationship.

Of more interest to me are the USSF contribution to the construction of the Frisco Stadium construction, per their long-term lease agreement. To the tune of $5,000,000 in fact. 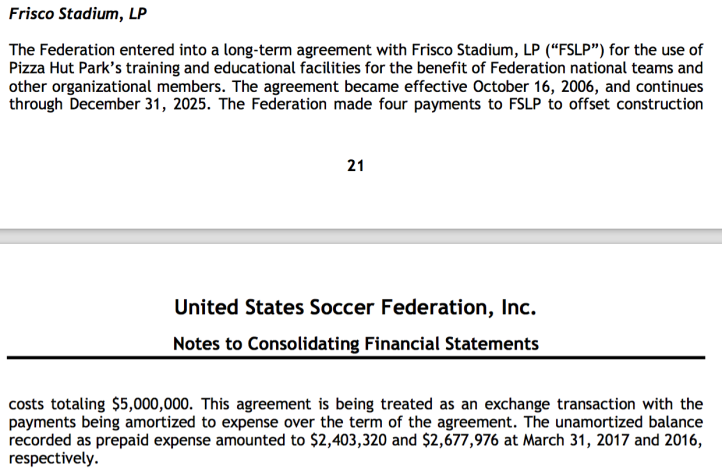 I’ll definitely have to circle back and do some further review of this lease, which I looked at in a recent stadium-lease snapshot.

Unfortunately, no mention of the total amount of legal expenses incurred, especially as it related to the many lawsuits that the USSF is currently embroiled in. My guess is we’ll have to wait for the next accounting (November 2018?) to get a real handle on those expenses.