The last Sounders practice before the game versus the Chicago Fire was a pretty standard affair. The team worked on shooting and prepared tactically for what will be a Chicago team that is likely to rotate their squad, after their mid-week U.S. Open Cup game versus Atlanta, where they played a first-choice lineup.

It was no surprise then, that the most notable thing happened off the pitch, where goalkeeper Stefan Frei gave a post-practice interview. After talking about the game this weekend, Frei gave his thoughts in response to the recent story from Paul Tenor, where it was reported that a contract extension between the Sounders and Frei was nixed by MLS.

The issue most acutely effects teams that are trying to re-sign players within the league to TAM contracts. Several teams have had player contracts denied by the league office, multiple GMs confirmed, forcing them to alter their plans. Players who have been turned down for TAM contracts include Seattle Sounders goalkeeper Stefan Frei, Philadelphia Union forward CJ Sapong (pictured above, left, with Parker), LAFC center back Walker Zimmerman, and former Sounders left back Joevin Jones.

While noting that he has a “good relationship” with the Sounders front office, Frei did not mince words regarding his displeasure over the situation.

“It’s not the first contract where the league has something to say, where teams and agents have agreed on stuff.” Frei said. “In future negotiations with the Union and the CBA (Collective Bargaining Agreement), it’s not so much about money as it is about [MLS] relinquishing power.

For as long as they have all of the special categories, whether it be TAM (Targeted Allocation Money), DP (Designated Player) or whatever, they’re all structured to give them [MLS] the power.”

Frei noted his frustration when the player and team come to a deal, only to have MLS come in from above and reject the agreement. “I know there are examples too on this squad and on other squads,” Frei said, which is probably a reference to Joevin Jones, the other named Sounders player above in the Tenorio story.

Going forward, Frei indicated that MLS should relinquish a bit of this power in determining who is entitled to what wages. “I think the best judge of that would be the GM and the organization, and not necessarily the MLS headquarters.”

Beyond that, not too much to note. Handwalla Bwana made his first appearance in a while, wearing a boot to protect his injured ankle. Not likely he will be with the team for the foreseeable future. In better news, Kelvin Leerdam, Lamar Neagle and Felix Chenkam look to be getting closer to returning, which will help bolster the depth of the team. 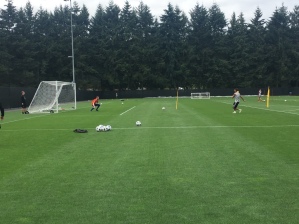