If there is one thing I’ve learned since covering stadium issues with local municipalities and MLS, it’s that in recent times, these things rarely get built without a lawsuit trying to stop them. From Nashville to Miami, there is generally some issue that gives rise to a lawsuit. In Miami, it was the no-bid deal between Miami-Dade and David Beckham’s group. In Nashville, it was the location. These suits have varying levels of success (Nashville’s was dumped quicker than a hiccup, while Miami’s is languishing in the appeals process), but they all have the ability to cause delays in reaching deals (Beckham still can’t figure out what he wants to do with the Overtown site).

And so it goes in Austin, where a local attorney has sent a Demand Letter (I prefer the term, “Nastygram”) to the City warning of a lawsuit to prevent them from entering into a deal with PSV/MLS. I’ve obtained a copy of the letter, which I’ll go over here. First a note: I’m not making any comment on the viability of a suit at this point. I’d need to do a more thorough review of Austin local rules and Texas Statutes before offering a fuller analysis. But at minimum, these suits can cause significant delays in the process.

Last thing before we take a look. This letter was sent by local Austin attorney Bill Aleshire. I didn’t receive this from him and haven’t talked to him in advance of writing this. Seems like an interesting person. I’ll probably look to talk to him as this suit moves forward, if it does. 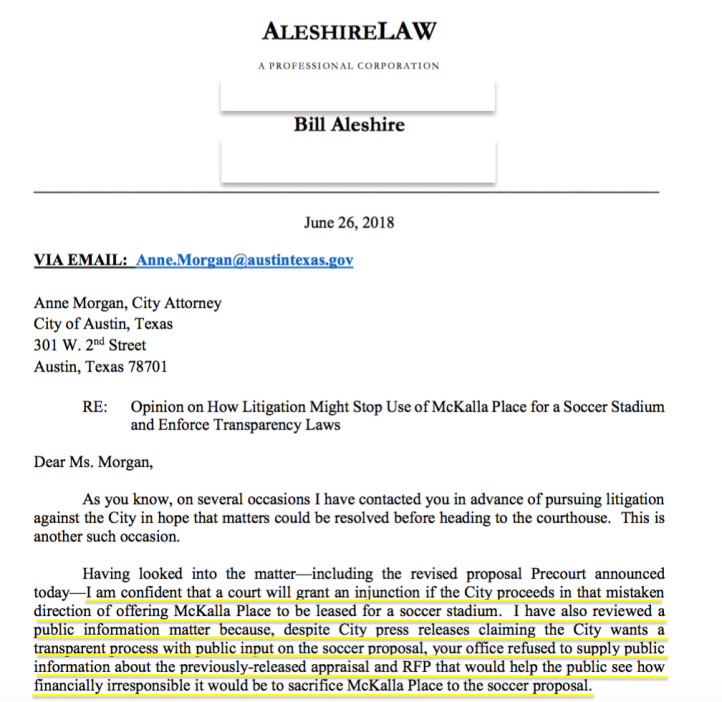 Obviously the two things of interest are the threat for what I assume would be 1) a preliminary injunction which would enjoin the City from making a deal with PSV/MLS, and 2) and the review of a previous appraisal of McKalla Place. We’ll leave the talk of an injunction aside for the moment. The other issue referenced is the appraisal of McKalla Place which Aleshire believes does not adequately protect taxpayer funds, should the City enter into an agreement with PSV/MLS which bring a financial return sufficient to cover certain costs.

Aleshire argues, “It is not lawful to use McKalla Place for a soccer stadium without full reimbursement to the Austin Water Utility of at least $18,261,323 (based on May 2017 numbers).” 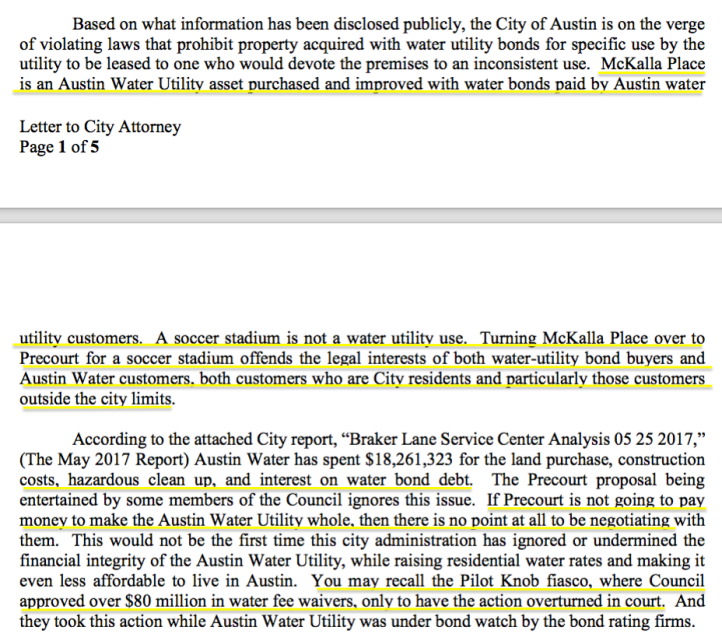 As I said, I’m not going to speak to the viability of these claims right now. However I did review the financial analysis referred to above. 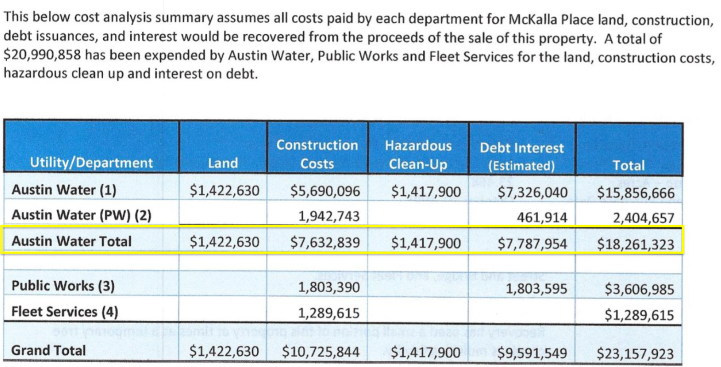 From there, we have a summary of the argument, along with some (implied) threats regarding the legal viability of entering into a deal with PSV/MLS. 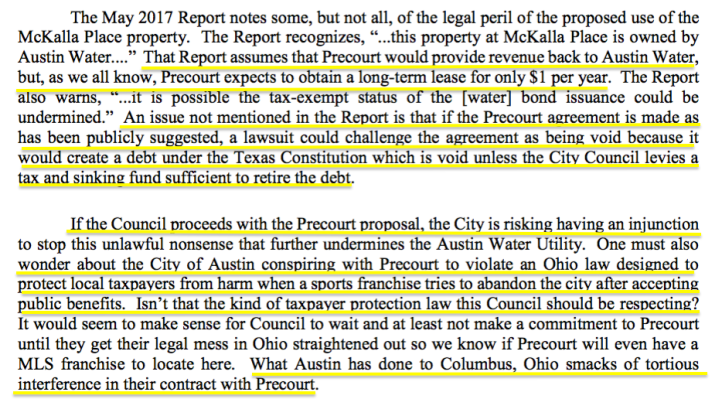 So there is a ton going on here. The now-infamous $1 lease agreement proposed by PSV/MLS makes its first appearance here, though this is more in the context of it being violative of the Texas Constitution regarding the creation of debt. I haven’t done a review of that, so I’ll refrain from commenting more substantively right now. More interestingly for immediate purposes, is the reference to the Modell law, and the implication of an unlawful conspiracy. It’s obviously true that PSV/MLS has a valid lease agreement with the State of Ohio that apparently, PSV/MLS intend to simply break if they get a deal with Austin. I confess I haven’t reviewed the “tortious interference” theory as it pertains to legal action between cities, though it has always been in the background of this case. Something to keep in mind going forward.

Aleshire argues, “It is not lawful for Austin to give Precourt the long-term lease they want in order to evade the statutory requirement for sale or exchange of public land through public notice and obtaining bids. (Tex. Loc. Gov’t Code section 272.001).”

We have two potential issues raised here. First, Aleshire argues that the City must get fair value from the sale of public land to a private investor. Second, the City must open up the process to competitive bid. 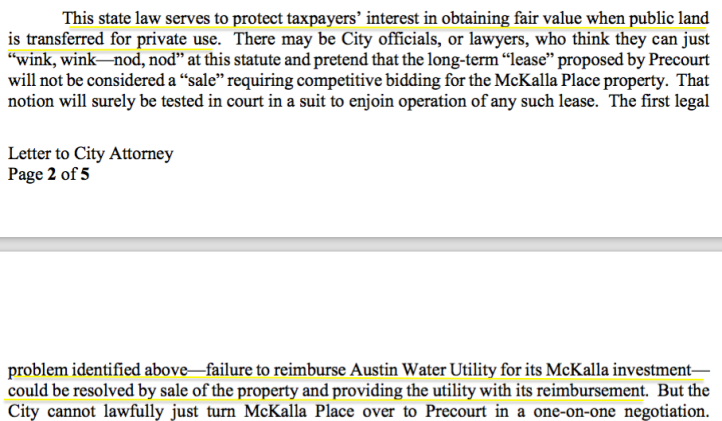 This mirrors in some way the Miami-Dade/Beckham purchase of the Overtown site, which was challenged for being sold without a competitive bid. Miami-Dade/Beckham won, because there were laws passed which were designed to facilitate such sales (involving unique or large-scale projects). I’ll have to review whether similar statutory language exists in Texas. But it seems to be an analogous situation.

Aleshire argues, “The City can be challenged in court for refusing to disclose the McKalla Place appraisal it previously released and the RFP created to offer the property for sale on competitive bids.”

The argument here seems to be that the City has released certain information to certain parties, when they are required to treat all requests for that information the same. 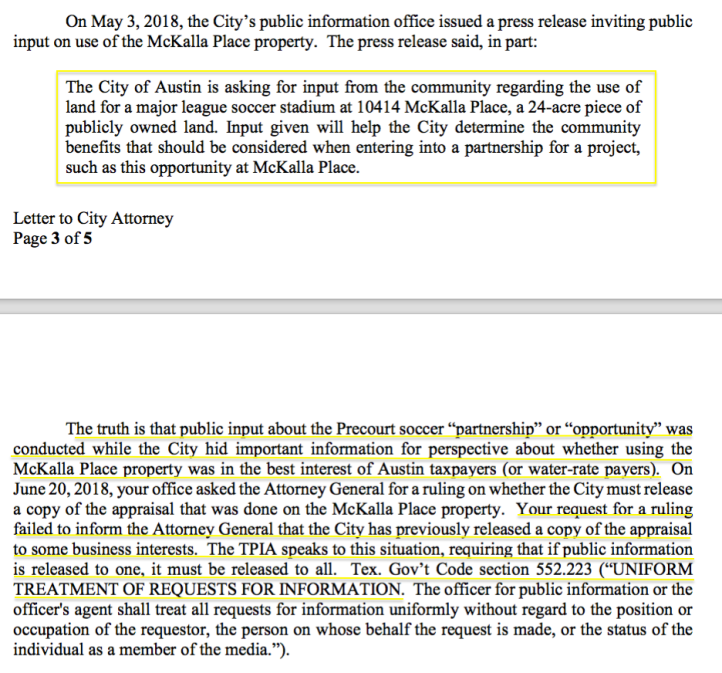 So I’m not sure the reasoning from the Council will be particularly persuasive to a court, as Aleshire points out. There are obviously public policy reasons why requested information should be disclosed to all parties seeking it. And it would be one thing if the City were involved with actual negotiations with one entity or another, but this is just a request for proposals. 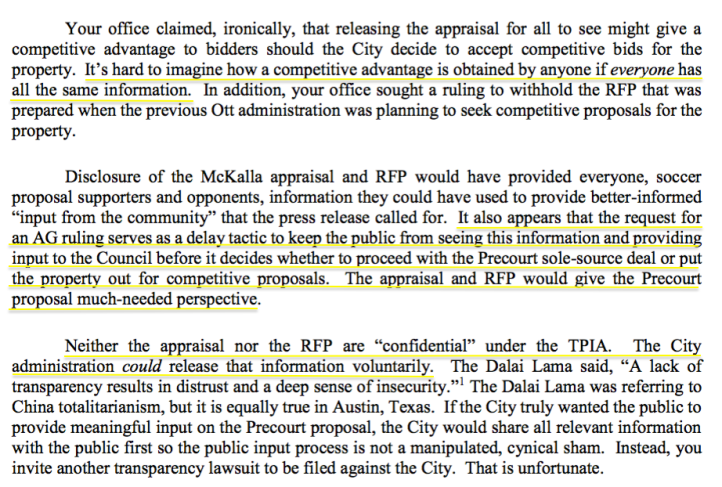 It should be noted that if item 60 is passed, that will allow other proposals to be considered, which would seem to mitigate that issue. That would leave only the issue of the PSV/MLS offer not being in compliance with Texas law, since it doesn’t allow for the recoupment of money expended but the Water Authority on the land. That of course could also be mitigated by PSV/MLS paying market value for the land, though as of now, that’s not something that is on the table.