The Sounders continue their preparations for Portland on the weekend and heath concerns continue to be top of mind, in addition to the team’s standing in the Western Conference. On the latter point, Ozzie Alonso indicated he is feeling better and better since having returned to the team from his dual quad injuries.

Will Bruin noted in his post-training interview that the team is running out of time to “say” they need to get results, and to actually get them. He also said that his health is getting better (the 10 day break surely helped) and is prepared for the physical play of the Timbers this weekend. Finally, he’s obviously read the reports about a potential new striker, and said that he welcomes the competition, and it’s understandable that the team would look to add offense when the team isn’t scoring as much as needed.

Beyond that on the injury front, Stephan Frei remains in the concussion protocol. Per a Sounders spokesman, Coach Brian Schmetzer is set to address Frei’s status tomorrow after practice, and no decision has been made one way or the other as far as his availability this weekend. Aside from that, the team seems relatively healthy. Lamar Neagle is back in full training, though Kelvin Leerdam doesn’t seem likely to feature just yet. 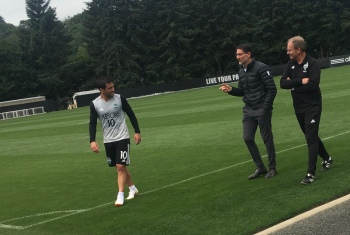