The Austin City Council is currently meeting to discuss and vote on various agenda items before them. Of course, this type of thing happens in city councils large and small, every day, all over the country. But for soccer fans (in two cities in particular), this meeting takes on an added significance, as two issues to be discussed, (and we presumed voted on) “Item 60” and “Item 130,” will have a large impact on when/if the Columbus Crew relocate.

I’ve previously discussed these items, so I’ll just link to that here, so as not to clutter up things too much. You can review the entire agenda before the City Council here.

The discussion could last well into the night/early morning local time, so it’s a good thing I’m on the West Coast. Time designations will be Pacific time; I’m not doing math.

3:24 PM: Items 60/130 aren’t likely to be discussed until later this evening, as other items get moved off the agenda. But that doesn’t mean advocates pro/against aren’t trying to get the best seats! 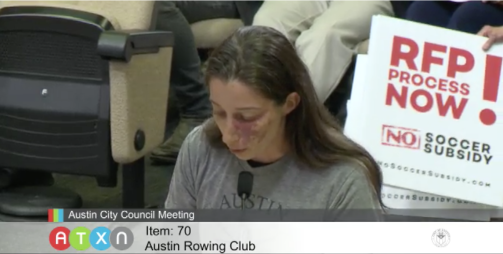 5:27 PM: It appears the first pro-soccer contingent has started to speak.

5:32 PM: Or, maybe not. Looks like they just took some kids out of turn. The discussion/vote is still scheduled for later. Back to bond stuff.

6:10 PM: One thing to keep in mind, is that however the vote goes, this is not the end (well, unless 130 fails). It’s more like the end of the beginning. There will be a rush to meet the August 9 deadline. If both pass as is expected, we’ll see multiple proposals in addition to the negotiations with PSV/MLS. One of the developers has indicated they’ll be ready to meet that August 9 timeline. This of course doesn’t take into account any potential lawsuits, or the happenings in Columbus.

7:07 PM: A memo has been released which outlines the procedure by which proposals will be accepted/reviewed for developers who want to pursue the McKalla Place site, should item 60 pass. Based on the procedure outlined therein, Mayor Alder says he will likely support item 60.

8:00 PM: Still on the bond issue. I guess agreeing to authorize $600+ million in funds takes a while.

8:55 PM: Almost done with the bond, but there are a number of other items still to discuss. Sorry, for you folks on the East Coast.

9:09 PM: Here is the amended “Item 60,” which authorizes the City to take proposals from those who wish to develop McKalla Place.

9:22 PM: Here is revised “Item 130.” And below, are the proposed amendments from Council-member Pool. I think this covers things.

10:05 PM: Council-member Troxclair is not sticking around for the MLS2ATX votes (maternity leave), but says she would have voted for both item 60 and 130. The fact they don’t need her vote should tell you how this is going to go.

11:22 PM: The Mayor reiterates that given the changes to Item 60 and 130, it’s likely that the resolutions will pass. First 20 people get three minutes, and everyone following gets one minute.

11:23 PM: Mayor Pro-Tem Tovo suggests that things start with any children (!) that are still there.

11:27 PM: I’m not going to review every person who testifies, but I’ll try to reflect the general sentiment. First person is concerned about traffic, parking and potential subsidies. 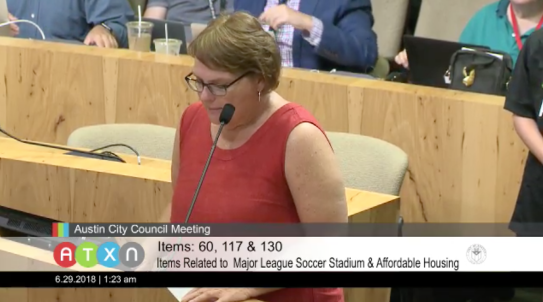 11:29 PM: Instead of applauding after each speaker, the Mayor suggests audience members either snap their fingers, or use “jazz hands” to save time. Apparently this may turn into a 60’s beatnik music session.

11:38 PM: Speaker is adamantly opposed to “fast tracking” a stadium deal, and says that Austin is like one of those “scumbag” cities trying to steal a team.

11:39 PM: Speaker in favor points out how a soccer team would be a boon to the hispanic community.

11:43 PM: Speaker is very concerned about environmental impacts and flooding. 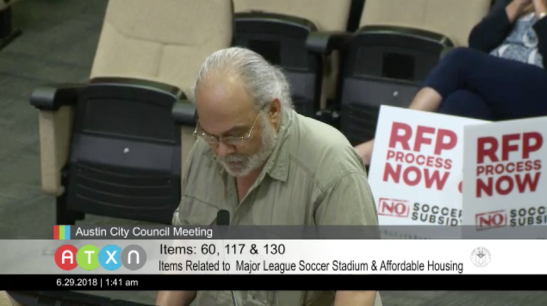 11:49 PM: People are actually snapping their fingers. I wish I could see the gallery to see jazz hands. 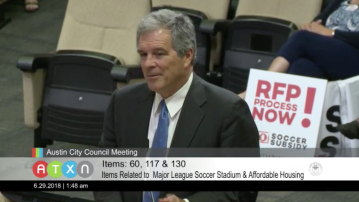 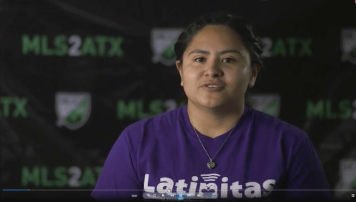 12:02 AM (Yep, we’re in the AM even on the West Coast): Speaker gets emotional talking about the burden taxpayers will suffer, if PSV/MLS doesn’t purchase the land and pay taxes.

12:06 AM: Speaker plays up the fact that Austin would be getting an existing soccer team, which is interesting.

12:11 AM: Speaker opposed to 130 apparently has filed a Bar complaint against one of the council members. 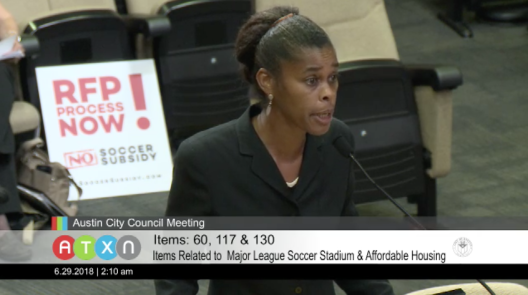 12:13 AM: Speaker in favor of MLS2ATX references the Portland Timbers. I’ll just leave that alone.

12:23 AM: Speaker says that Precourt’s commitment to a long-term lease is dubious, in light of the fact he intends to break a lease in Columbus. Also points out allegations of health code violations. Says shouldn’t trust someone who “feeds mouse feces to his customers.” 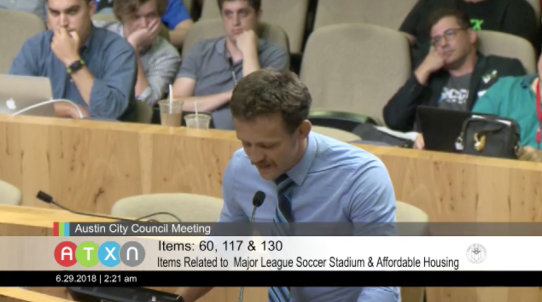 12:25 AM: Former Columbus resident/student in favor of the Crew coming to Austin.

12:27 AM: Supporter points out a team can bring the community together. Notes the amusing scenes outside the South Korean embassy in Mexico City the other day.

12:33 AM: Anthony Precourt speaks! Not much of interest, lots of thank-yous and commitments to work with the City.

12:43 AM: Honestly a *little* surprised that Precourt showed up and testified. It essentially wipes away any pretense (to the extent it was still there) of “parallel paths.”

12:52 AM: Per Chris Bils, multiple council members are standing around pacing, presumably to try to stay awake. Safe to say the mayor’s attempt to cut the number of speakers by saying these votes were likely to pass didn’t work.

12:56 AM: Speaker says she’s commissioned a poll that says that 55% of Austin residents like soccer. Poll also said 80%+ think PSV should pay market rate, pay for rail station and parking. There were more, but I didn’t catch them.

12:59 AM: Speakers are the potential developers (John Chen, Marcus Whitfield), who says their proposal to develop affordable housing and office space is “for Austin” and not out-of-state interests. In favor of item 60. 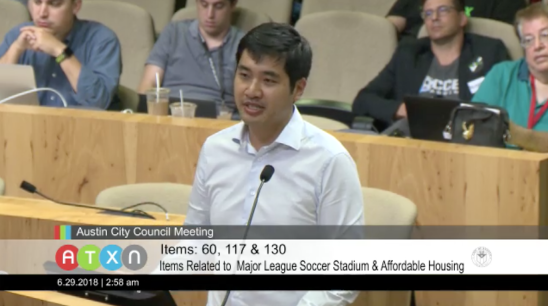 1:14 AM: Discussion now on the memo which supplements Item 60, which is the process to receive proposals from potential developers.

1:15 AM: Council-member Houston wants to amend to say that proposals should be presented to the Council on August 9, with a Council return on August 23 to vote. It’s been seconded. Discussion ensues.

1:18 AM: Whoa! PSV lobbyist Suttle says that PSV has blown past the MLS-imposed deadline and received an extension. August 23 doesn’t work for them; they need the decision on August 9.

1:22 AM: With some changes being made (which I’m not quite clear on), Houston withdraws her motion.

1:27 AM: Item 130 up for discussion; a couple of amendments have been accepted.

1:28 AM: Mayor Pro Tem Tovo notes she isn’t a soccer fan, but thinks having an MLS team would be great for the city. Says community benefits must outweigh public investment.

1:35 AM: Casar notes this isn’t the end of the process. Affordable housing is important. While concerns about subsidies to private entities are important, thinks Austin can get a good deal. Says MLS doesn’t generate a lot of money so it won’t be the best deal, but it is a community benefit and needs to be fiscally sound.

1:36 AM: Council-member Alter invites all prospective business to come and offer best foot forward. Says PSV offer was not good enough. If PSV wants to meet their 8/9 deadline, they need to improve offer.

1:40 AM: Council-member Flannigan says this vote doesn’t bless the PSV deal. Notes that Precourt may wish he didn’t have to negotiate with the City, because they’ll “put him through the wringer.”

1:50: Item 130 has been approved 9-0 (two abstentions). We move on to August 9, where the council will receive the proposals to potentially vote on. And that’s it!