Well, we’re (almost) here. At 10:00 a.m. local time on Wednesday, David Beckham and his business partner Jorge Mas will appear in front of the Miami City Commission, to try […]

Well, we’re (almost) here. At 10:00 a.m. local time on Wednesday, David Beckham and his business partner Jorge Mas will appear in front of the Miami City Commission, to try to get approval to put before Miami voters authorization to negotiate a lease for the Melrese property with the City. There are still hurdles to overcome even if the voters approve, but we’ll leave that for another day. For now, lets just concentrate on the events set for Wednesday, July 18.

Beckham’s proposal failed (or, didn’t pass if you prefer) because they were unable to convince the sole undecided vote of the five to agree to send the resolution to the November ballot. Since then, they’ve put on high-press to assure the Commission members (and media) that this isn’t the so-called Marlins deal. To that end, it looks like there is a proposed “term sheet” that was just released, which I presume will supplement the resolution to be sent before the voters. It’s important to note that the actual deal will NOT be on the ballot in November, only the ability for the City to negotiate the lease with Beckham and Mas (“Miami Freedom Park”). Let’s take a look (h/t Chris Wittyngham).

As I noted above, this agreement is contingent on voter approval to amend the local charter to allow a “no-bid” agreement to lease the property. If the voters don’t approve, the project is dead. 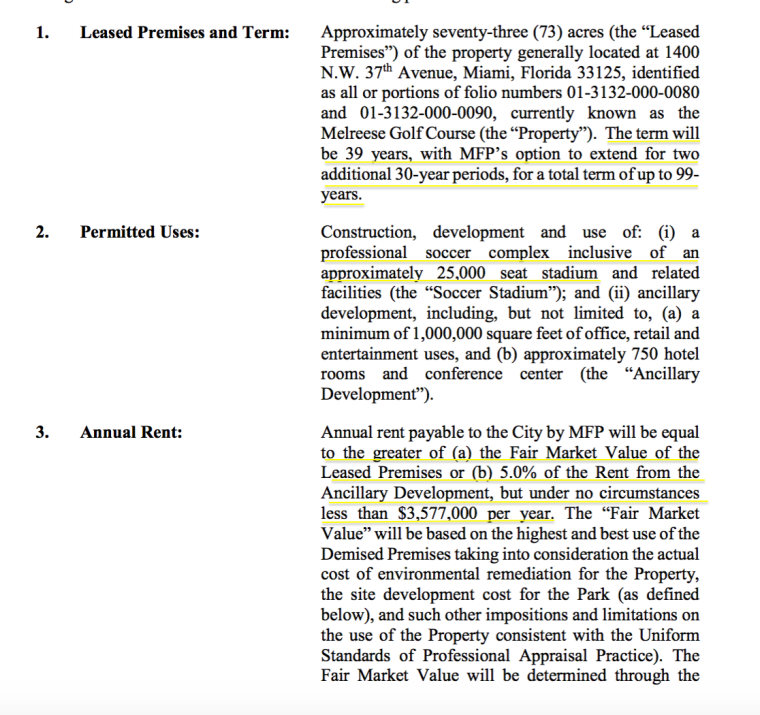 So we’ve got the lease term, which is up to 99 years if the options are exercised (and given this development, at least one of the options likely would be), permitted uses (including the soccer stadium) and rent, which shall not be less than $3.5 million per year, and could be more depending on how much money the development makes.

This was a point of contention, especially regarding the environmental remediation. The reason being that the proposed development sits atop a toxic waste dump, that needs to be cleaned up. The coast is estimated to be around $30 million, but could be much more. This provision is designed to ensure the City isn’t on the hook for anything, if the cleanup ends up being two or three times the estimate.

In lieu of a pure revenue sharing agreement, the Beckham group has agreed to, in the event the development is transferred to another entity (think insurance company of venture capitalist group), to share the gross proceeds of the sale with the city. 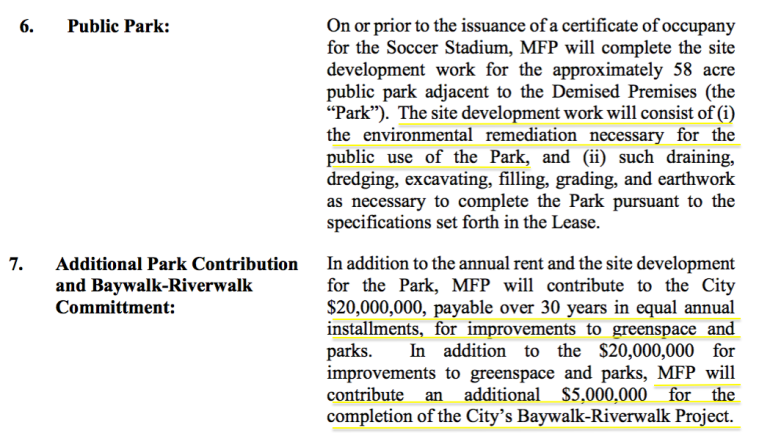 Some additional proposed perks are the creation of a large park space, and improvements to the completion of a Riverwalk (the latter of which I think is new).

Confirmation that Beckham’s group will be totally responsible for all environment remediation. Again, the $35 million is simply an estimate; it could be much more. Either way, the City is insured against that possibility.

This was another point of contention which derailed the vote last week. Beckham’s group has agreed to the wage requirements from the City (Committee-member Russell specifically).

There was some talk about moving the 1st Tee program to a golf course in another city (Miami Gardens). Not sure if that is still happening, or if they are simply designing a section to accommodate this program.

So there you go. Given that this was released (and the aforementioned high-press), my guess is that this is enough to get this over the finish line, we’ll see a vote in November to put this term sheet into a more formal lease and operating agreement. The vote was 2-2 with Mr. Russell undecided and leaning “no” last week, which is why this vote is happening tomorrow. If they get only Mr. Russell, they’ll still need to work to sway one of the other members, since you need 4/5 votes to approve the lease and operating agreement. But for now, baby steps.