The late-night news that the Sounders were going to waive Magnus Wolff Eikrem certainly came as a bit of surprise to Sounders fans. Though frankly, it probably shouldn’t have. His appearances this season were limited, even when the team was decimated by injuries. He was left off the 18-man squad versus Atlanta United, and at the end, he was left to scrimmage with academy kids this week.

So his time has come to an end, and both Coach Brian Schmetzer and Sporting Director Chris Henderson addressed the news after practice. Both had essentially the same message: the player ended up not being the right fit with the team and how they wanted to (or could) play. Schmetzer noted that once Jordan Morris went down, Wolff’s main attribute -sending runners in on goal with through balls- was not something the team could take advantage of.

Beyond that, Schmetzer said that they took the long-term prospects of the team into account, and determined that the player wouldn’t fit into that future, and decided to cut bait.

Henderson addressed what the Sounders plan to do going forward, noting that the team will get some form of salary relief (though not much; I have a request in for some clarification) and the international slot. They are continuing to look for another impact overseas signing. Additionally, I asked if trades inside the league are a possibility, and Henderson confirmed that they are looking at that as well.

As for the team, it’s clear that a near-healthy squad presents many more options for Coach Schmetzer over the next week-plus, where they have three games. Raúl Ruidíaz was full-in at practice, and you can see his quality on the ball and has a variety of ways to put the ball in the back of the net. It was difficult to see what players in the attacking end Coach Schmetzer will go with on Saturday, and I’m sure that’s the way he likes it. 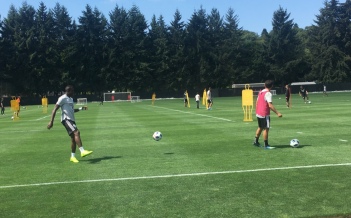