You didn’t think it was smooth-sailing from here, did you?

David Beckham’s prospective Miami franchise appeared to clear a huge hurdle last week, when the Miami City Council agreed to move to a November vote a proposal to authorize  an amendment to the City Charter. The vote would allow the Council to directly negotiate with MLS a lease for city-owned land, without putting the land out for bid.

That vote was delayed a week, when after listening to public comment on the matter, the general terms of the proposed agreement did not satisfy a majority of the council. Further negotiations (and some concessions by Beckham’s group) finally got things over the line.

Or so we thought.

At the same time the Council was meeting to consider Beckham’s revised proposal, a lawsuit was filed by a local Miami attorney. Douglas Muir is challenging the process by which the Council agreed to send the resolution to a November vote. If this sounds somewhat familiar, it should. It looks to be about the same fight that Beckham is going through with his previous location for a stadium in Overtown. That case is still awaiting a ruling on the appeal by Bruce Matheson, who filed the lawsuit (and lost).

I wasn’t sure if I was going to write too much about this lawsuit, as it appeared that it had about the same chances of success as Matheson’s. But the judge in the case has ordered the Council to respond to Muir’s complaint/motion, so things have gotten considerably more serious. With a deadline of August 7 to place the ballot language on the November ballot, the Court has decided to expedite things to allow the issue to be resolved before then (normally, there is a 20 day response time).

With all that in mind, let’s take a look at the suit, and see what’s going on.

Briefly, what’s at issue is a plot of land owned by the City; “Melreese” is a 150+ acre plot of land, upon which currently sits a golf course. They City is within their rights to convey/sell/lease the land, but per the City Charter, there is a process by which they must do this. Specifically, under section 29A/B of the Charter, the City cannot do anything with the land without having public hearings and soliciting bids from interested parties, so they can get the best deal for the citizens of Miami (i.e., no-bid deals are prohibited).

Now, the resolution they are sending to a vote in November simply allows the City to negotiate with Beckham’s group, without putting the property out for bid. And, the City did have public comment at the initial hearing where proposal (I covered it live), was discussed and then delayed. But, there was no public comment for the subsequent vote, where the (amended) ballot language was approved for the November vote, and the term sheet was basically given approval.

After the lawsuit was filed by Mr. Muir, the court has determined that he has a prima facia case which the city will have to respond to. This has obviously concerned MLS, as they’ve added themselves as a defendant to the suit. 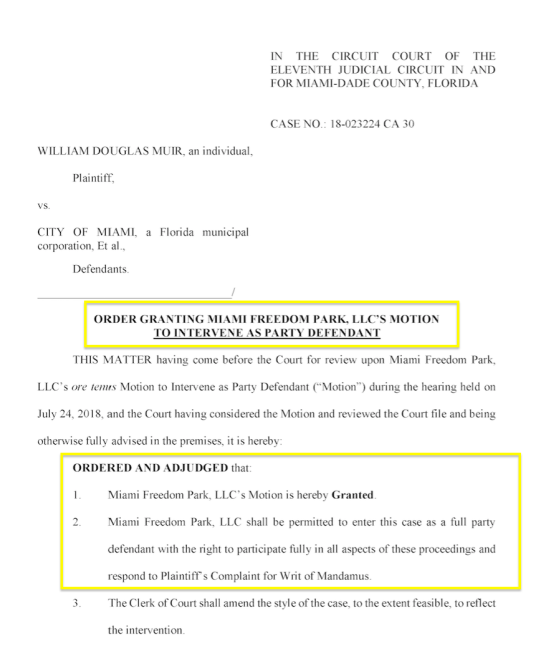 The lawsuit alleges that the City violated the City Charter in sending the resolution to the voters to approve (or reject) in November. 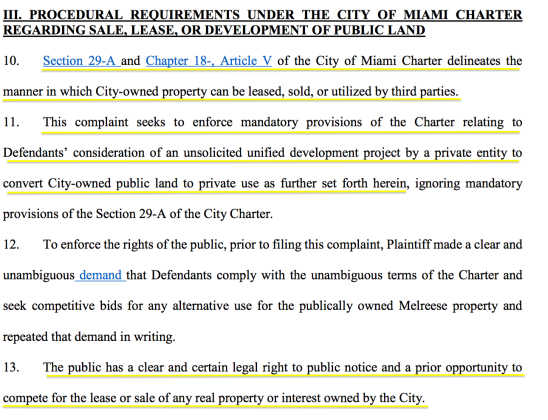 As I noted, there was public notice, though the term sheet certainly was the result of exclusive negotiation between Beckham/MLS and the City. Of course, the term sheet has no binding effect as of yet, since the vote authorizing the City to reach an agreement with Beckham/MLS hasn’t been held, much less approved.

The allegations are pretty straight-forward actually. The City didn’t follow the required procedure, and the whole process wasn’t transparent. 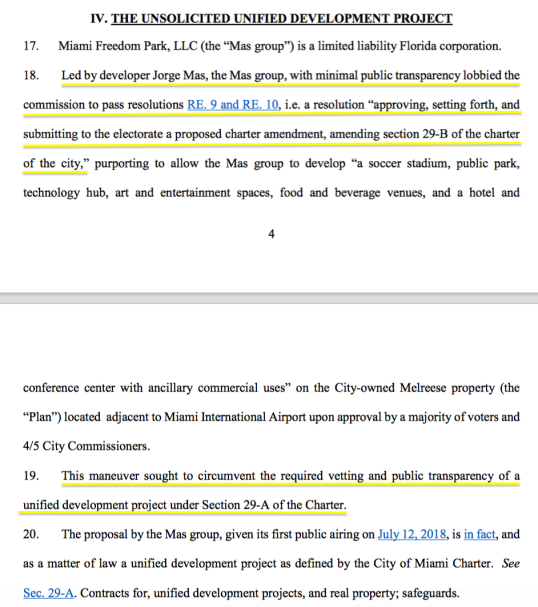 Since the City Charter doesn’t allow so-called “no-bid” contracts, the City needs to amend the charter to authorize such negotiations. Which is why they passed the resolutions mentioned in paragraph 18 above. The full ballot language for the proposed amendment is as follows: 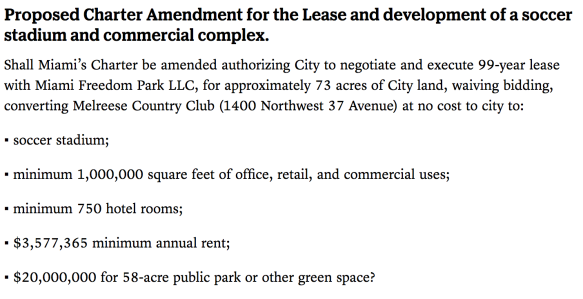 The complaint from Mr. Muir is that this ballot language is flatly insufficient and violates the law. 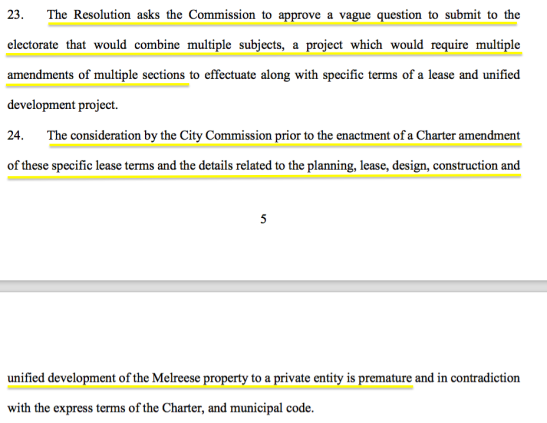 Couple of interesting things here. There are typically rules prohibiting loading referendums with multiple, unrelated subjects and the like, so I’ll be interested to see how the MLS and the City respond. As to the consideration of potential terms and conditions of the Miami/MLS agreement, I’m not sure that’s illegal per se, as the agreement isn’t binding. It probably depends on the meaning of, “favorably consider.” 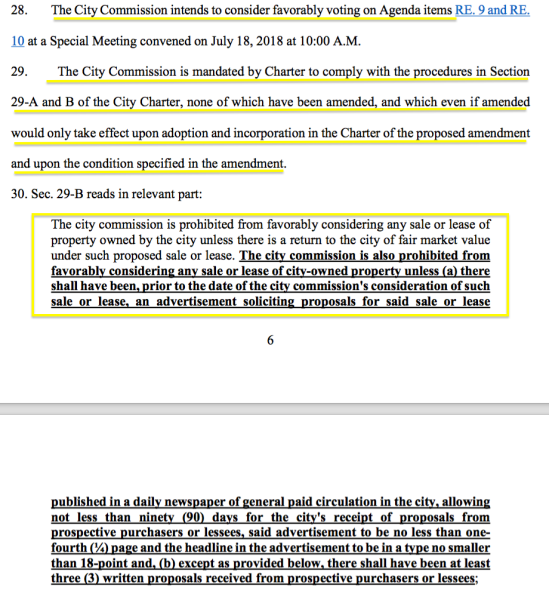 Mr. Muir’s use of  “favorably consider” in paragraph 28 is a bit loaded, as the lease itself hasn’t been agreed to. Basically, the City wanted some assurances from Beckham/MLS regarding the clean-up of the land, minimum wage and expenditures of city funds. But again, those things aren’t binding. It’ll be an interesting argument either way.

More interesting will be how, if the Court *does* decide that the City has favorably considered the lease terms, is how they get around the issue of the effective date of the amended City Charter. Mr. Muir notes that state statute says it’s effective as of the date its adopted. 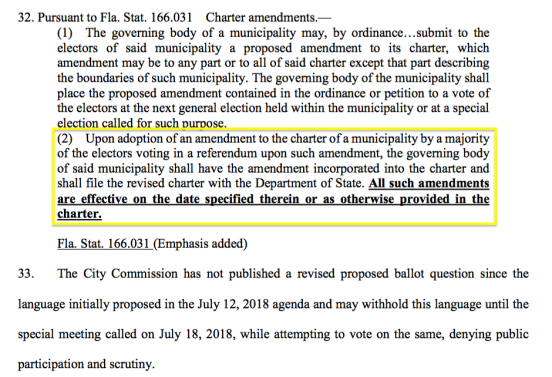 This is a sort of “cart before the horse” argument, but I’m not convinced the Court will see the non-binding proposed lease terms as a real problem.

The second big issue raised by Mr. Muir centers around the general alleged lack of “transparency.” This entire discussion came together very quickly. The proposal from Beckham/MLS wasn’t even publicly disclosed until July 9. And the initial vote was held on July 12. It’s difficult to argue with Mr. Muir’s complaints here. Section 29 (A) of the City Charter has a lengthy process by which these deals are to come together, including requests for proposals and public notice. 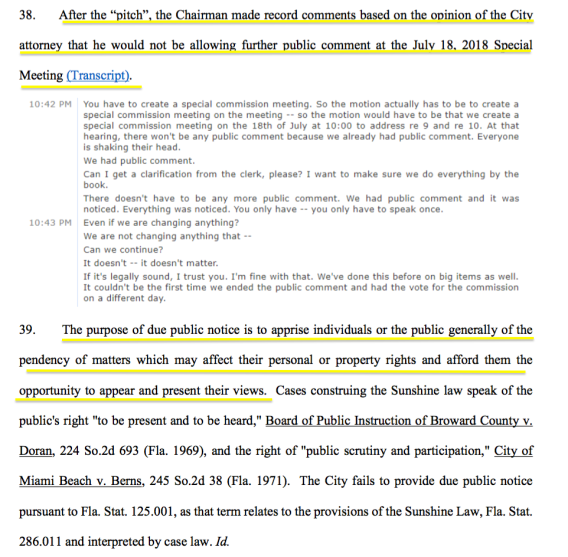 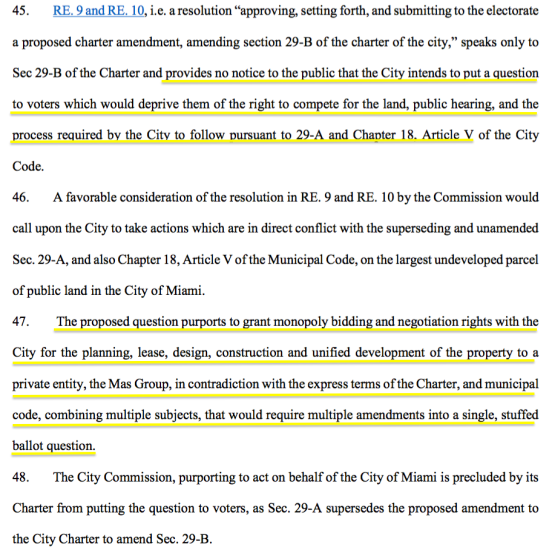 In summary, this whole process could end up following the Matheson/Overtown proposal off the legal abyss. We are a year out from when that case was initially filed. If this case follows a similar track, it could be July/August of 2019 until there is a resolution. And maybe much longer. Given that the Court here has found that Mr. Muir has established a preliminary case, Beckham/MLS should be a bit worried that the Court has ordered they respond to this suit. 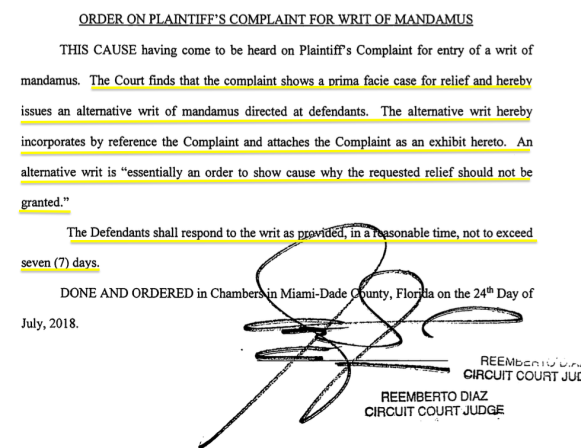 That’s July 31. We’ll see how MLS and the City respond.