Skip to content
SaveTheCrew: For Whom the Bell Tolls (Or, Will Time Keep on Slipping)
Lawsuits

SaveTheCrew: For Whom the Bell Tolls (Or, Will Time Keep on Slipping)

Note: I recently started a Patreon for those who want to help support/expand my writing content. Whatever you’d like to contribute is greatly appreciated! End plug. Become a Patron: Right […]

Right now everyone is focused on the council meeting in Austin this Thursday, where we should (presumably) find out if MLS2ATX will become, from their end, a reality.

There is, however, lots of unfinished business. Setting aside how well the negotiations between MLS and the Columbus Business Partnership (CBP) are going (yes, that’s sarcasm), we still have an unresolved issue underlying this whole thing: The toll of the six-month notice/opportunity to purchase.

As I’m sure everyone is aware who has been following this case, the Judge on May 8 granted a 90-day toll of the six-month requirement as part of his global procedural order. I’ll post the relevant portion of that order for a refresher. 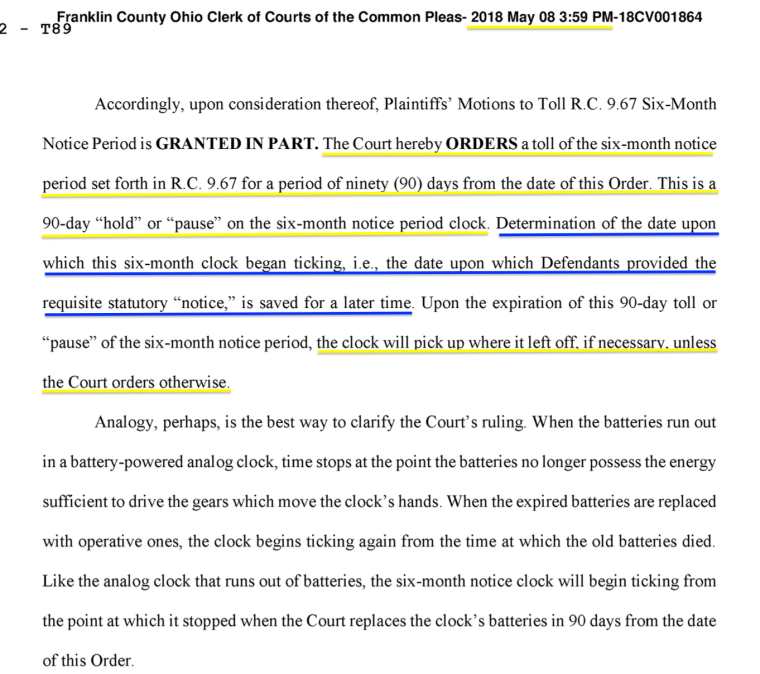 I highlighted the portion in blue to note that the Court has NOT made a determination as to when PSV/MLS gave property notice; there is an argument they *still* haven’t provided notice. But setting that aside for now, this order was entered on May 8. And if you check your calendar, you’ll note that the expiration of that 90-day toll is…today (August 6). In theory, the batters should be but back in the clock, and the six-month notice clock should begin ticking. Of course, there is one other issue.

After the May 8th order was entered, PSV/MLS flipped their lid and filed for an appeal from that Order. The parties then spent the next 44 days arguing about the appeal, at which point it was summarily dismissed. During that 44 days, it’s my understanding that the parties had little to no communication about the underlying lawsuit, or the May 8th Order. That’s in spite of the fact that the there was no stay of the Order requested by PSV/MLS. By my estimation, they essentially ignored the Order for 44 days.

Since there was no formal stay of the of the Order granting the 90 day toll, there is an argument to be made that the 90-day toll expires today, and that if notice were determined to have been given by PSV/MLS in October/November 2017, the six-month notice requirement has long since passed. And even if not, the alleged March notice means that the 180 days is up in September.

However, Judge Brown built a failsafe into the order. Basically, he can make adjustments to the 90 day toll as he sees fit.

This is a pretty powerful tool to be wielded by the Judge in this case, allowing him to wield substantial procedural power in this case. But wield this power he must, which means an Order needs to be filed so as to let the parties where the case stands (and to make a record to allow for an appeal by one of the parties, should they deem it necessary). At a minimum, there are 44 days that need to be accounted for, one way or another. So what is Judge Brown likely to do?

Based on my understanding, PSV/MLS essentially argued that any extension of the toll was not necessary, because they have been cooperating with the “spirit” of the May 8 Order by negotiating with CBP, and whatever other interested parties there were. Again, that cooperation did NOT extend to the plaintiffs during that 44 day period (and with whom the May 8 Order covers). As a result, you can imagine that the plaintiffs do not share PSV/MLS’ point of view on the matter, and argue that the 44 days should be tacked on to the end of the toll.

Either way, the court needs to make a ruling on the matter. So what will Judge Brown do? My guess is that he will indeed extend the tolling period by some amount of time. A hint can be seen in the order he issued last week, requiring the parties to provide status updates every 15 days for as long as he deems fit. One could theorize he wouldn’t issue such an order if he was prepared to rule that the toll was up, meaning PSV/MLS could argue that the six-month period has or was about to elapse.

Whether it is the full 44 days is anyone’s guess. Depending on how he rules on when PSV/MLS actually provided notice (if they did at all), it may be somewhat moot. Hopefully, we’ll get some clarity on the issue today.