We’re about 20 minutes away from the Austin City Council returning from recess to take up the MLS2ATX proposal, which if successful would pave the way for PSV to bring the Columbus Crew (or an expansion team) to Austin. Needless to say, this is a big vote in the drive to get a Major League Soccer team to Austin. I handicapped the vote in my other post, so this will be simply for following the discussion and vote.

You can read about the proposal in full here.

I reviewed the proposal here.

I handicapped the proceedings here.

The discussion should not last as long as it did last time; they’ve committed to be done by midnight local time. Time designations for my blog will be Pacific time as I’m not doing math. Excuse any typos; I’ll try to correct as I go along.

4:48 PM: Also, a reminder that the official vote could get punted until tomorrow, if they can’t get done by the midnight deadline.

4:53 PM: Remember how I said that the gender equity/girls academy funding would be a major issue?

At least I’m right on point here. Even nailed the Council-member who’d bring it up . (h/t Kevin Lyttle)

5:13 PM: Here we go! First 20 people that speak get three minutes; everyone else gets one minute. They’re going to divide it 10 people pro, and 10 people con. 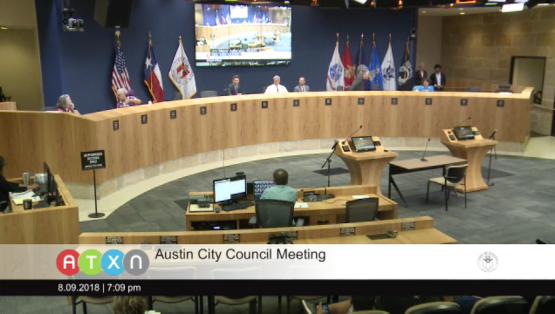 I’m not going to recap every speaker; if they have something interesting to say I’ll note it.

5:23 PM: Speaker complains that the revised Term Sheet was released first to the media and then to the public at 10:00 p.m. Requests the item be postponed to August 23. Says revised deal is worse than the original Term Sheet. Wants an RFP.

5:33 PM: First pro-MLS2ATX speaker notes that Cincinnati and Nashville governments are paying significant funds to get stadium built, as opposed to Austin. 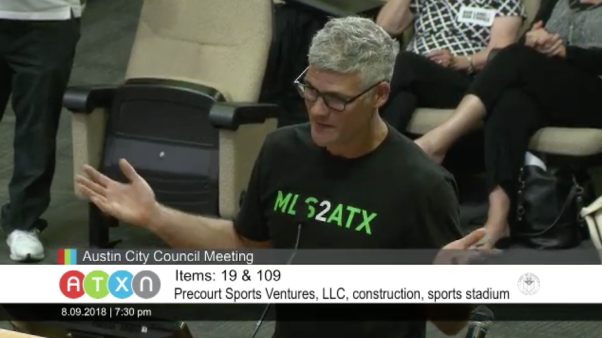 5:40 PM: After a short detour to correct some defective legislation, a second pro-MLS2ATX notes the civic pride in having a stadium and team. Implies that the Council is more interested in “bean-counting.” 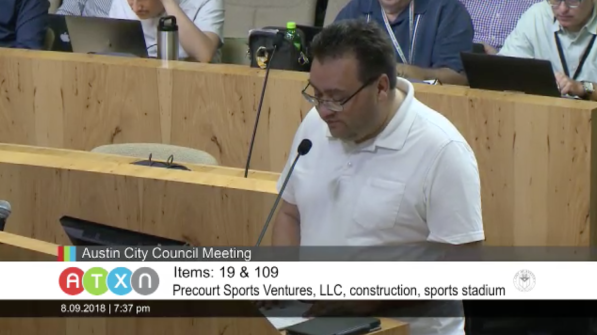 5:45 PM: As I (and the Council) previously noted, many of these arguments are a rehash of the arguments from the hearing last time.

5:48 PM: An amusing riff on the David Letterman top-10 list. Suffice to say, this voter isn’t in favor of MLS2ATX. 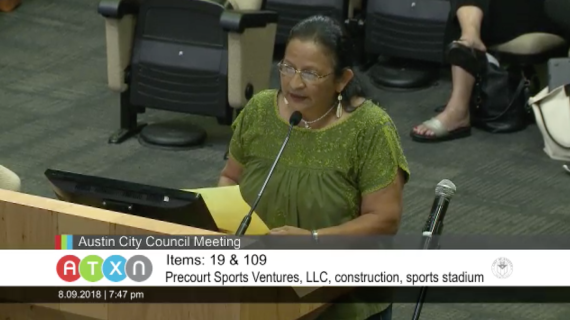 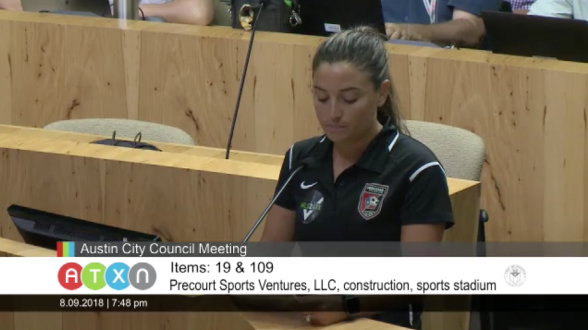 Tovo wants to know what the “arrangement” between PSV and Lonestar would be. 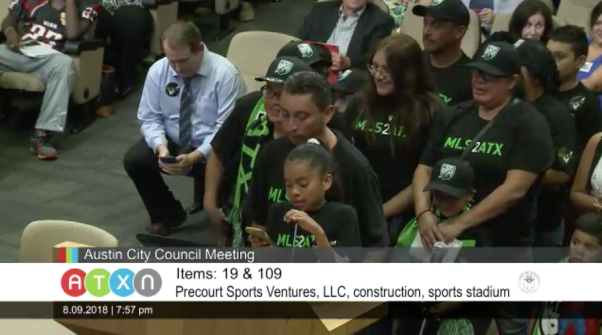 6:10 PM: Group of MLS2ATX supports asks a basic question: “Do you want Major League Soccer.” Calls out Council-member Pool in personal terms. Eh…not sure this is a good tactic. Some boos from the crowd. 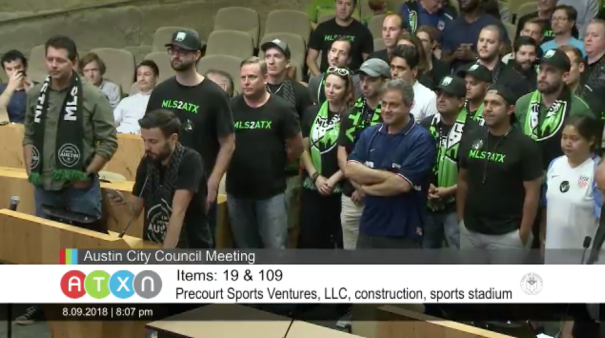 6:16 PM: This ends the first phase of the discussion. Speakers going forward will have one minute to speak.

6:23 PM: Another speaker says he knows that PSV is committed to funding soccer for girls. Notes the land was not being used or bringing in revenue previously.

6:29 PM: Speaker says she knows a boondoggle when she knows it. Says that this has been in the works for two years, and it explains why a previous proposal to build housing at McKalla was rejected last year.

6:36 PM: Owner by FC Austin Elite says they were pushed out due to lack of places to play. Says there are three good girls programs. Says they need a place to play; they don’t need a new (girls) academy team.

6:43 PM: Speaker says that some of the opponents simply don’t like sports. Deal may not be perfect, but the Council shouldn’t let the perfect be the enemy of the good. Says that if the Council doesn’t approve, Precourt/MLS will probably go somewhere else. Which is probably true.

6:53 PM: Speaker says his soccer organization sat down with PSV to ensure that kids who can’t pay can play, and says that PSV gave their commitment to help. Pool wants to know if there is anything in writing, but is happy that PSV has had discussions regarding that. Wants PSV promises on writing. Speaker then says that even if his group is not involved, others will be.

7:02 PM: I can guess that the Council is going to want to know more details than what has been agreed to between PSV/Lonestar, but it’s early still in the discussion.

7:03 PM: Here is the question: Alter wants to know how much money are Lonestar getting? The Lonestar refuses to answer! Suttle refuses to answer, and say that the Council should remove the amount related to the boys academy. Oh my. 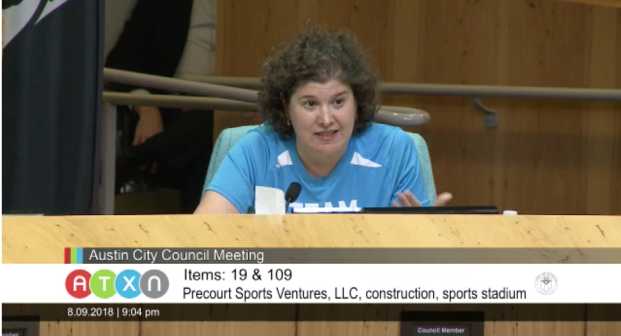 7:10 PM: Tovo wants to know if there is *anything* that Suttle can tell them about the deal between PSV/Lonestar. Suttle says no. I’m stunned here. 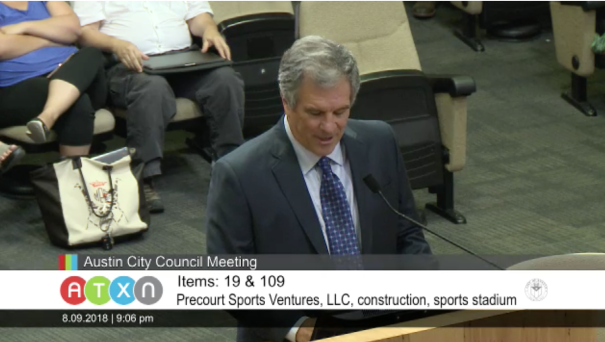 7:13 PM: Precourt says they are exploring the possibility to bring NWSL to Austin. But no commitment. Can’t bring it into the Term Sheet.

7:14 PM: Mayor Adler moves the focus to the problems that the City has, such as segregation. Seems to be trying to turn the temperature down by saying the “community benefit” is bringing people together. Says that this deal can’t solve everything.

7:20 PM: Adler chides PSV/MLS for adding the MLS-mandated youth academy for the Community Benefits. Tells them not to add a potential NWSL team, because it isn’t certain.

7:22 PM: Kitchen supports bringing soccer, but she has a duty to ask questions because it’s a complicated deal. Says she likes a lot of what she’s seen, but it’s appropriate to ask about how girls/women can benefit. 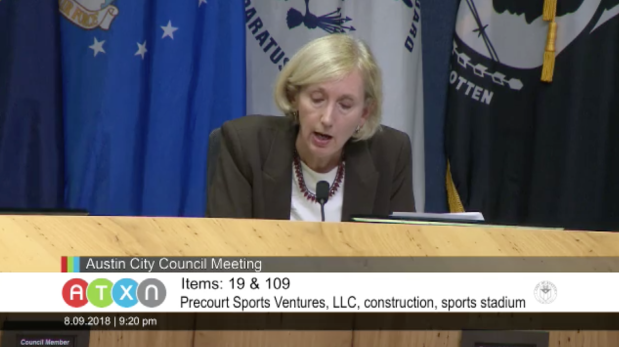 7:24 PM: Suttle back up here to do damage-control. “We blundered” when they put that MLS-mandated boys academy in the Community Benefit. Thanks the Council for “bringing it” to their attention. This is pretty smarmy.

7:29 PM: Pool wants to know how often youth groups will be able to play in the stadium. Suttle says there is no number, because the field has to remain in “pristine” condition. Suttle says it could be for clinics and “hang out.” Money set aside for rehabbing other field.

7:31 PM: Suttle says that Pool isn’t going to vote for this anyway, so he wonders why they are talking. Pool says she’s trying to get the best deal even if she doesn’t and would like to vote for it if the deal is good enough. 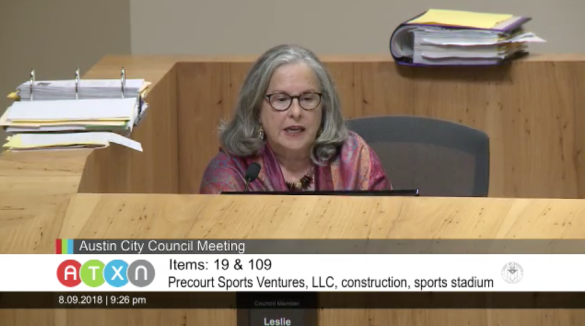 7:34 PM: Adler clarifies with Suttle that the clinics are in the range of $2 million and are equal between both girls and boys. Adler chides Suttle for not talking about that.

7:36 PM: Tovo says the Term Sheet should be amended, and is struggling with the Development Academy revelations, and PSV/Lonestar’s refusal to disclose any information.

7:42 PM: Lodestar clarifies that PSV will underwrite the academy (supplement) and the WPSL (in total). Will include travel dollars, equipment, coaching education. Won’t get into the amounts. Will be for a long time (decades).

7:43 PM: Houston says there is no way she will be able to vote on the Term Sheet, as it was just released last night and she hasn’t read through it.

7:50 PM: So…we are at 9:50 pm local time (with a supposed midnight deadline), and there are still two other agenda items unrelated to this. I’m not seeing how we get to a vote tonight, or even get through this discussion, but we’ll see.

7:54 PM: Pool has submitted her amendments, Tovo is getting set to submit hers, and Alter is adding hers now. Bringing up the transportation piece as a concern.

8:00 PM: Sounds like just about everyone has an amendment or six. Motion to continue the meeting past 10:00 p.m. passes 9-2 (Houston/Troxclair voting no).

8:02 PM: Kitchen says there are 25 amendments. Asks to consider moving this until next Wednesday. Adler asks if it’s possible to work in the morning until Noon.

8:07 PM: Five minute recess to discuss potential re-scheduling to address this tomorrow, or next week. Wow.

8:24 PM: This is getting moved to Wednesday. Suttle says that MLS may not grant a further continuance, making rescheduling the matter moot.

8:32 PM: Going through some procedural things right now to prepare for next week.

8:38 PM: Tovo has some questions about use of surrounding facilities and the stadium to the City. Suttle says those would be available to the City subject to expenses (utilities) and priority. Tovo wants information on public access, including outdoor spaces. Suttle says if there is no scheduled event, the public can use it. If there is a scheduled event, it would not be available.

8:46 PM: Adler and Pool get into it a bit over the definition of “poison pill,” but they manage to cool things down.

8:53 PM: Alter wants to know what happens if StadiumCo (PSV’s corporation which would operate the stadium) defaults on its financial obligations. Legal assumes the whoever holds the loan would step in to the shoes of StadiumCo(?) to recoup their money, and the City is protected. Not sure Alter (or I) made sense of that.

8:56 PM: Some in the crowd mocking questions that Alter is asking. She doesn’t appreciate that behavior, and neither does Adler, who tells the crowd to pipe down. How do they think that is going to help MLS2ATX get passed?

8:59 PM: Suttle can’t answer how many events that PSV will use the facility for in a year. Simply says that the City won’t be on the for them financially. Alter not impressed.

9:04 PM: Tovo notes that Garza’s amendment centers around a ticket surcharge helping to fund Cap Metro, if I’m not mistaken.

9:10 PM: Flannigan was hoping to get this done tonight, but wants this decided either way based on what the math says. Motion to postpone Item 19 until next Wednesday is made and seconded. Suttle is trying to ensure he has all amendments. 9:24 PM: PSV releases a statement on the heels of the non-vote. It’s…much more diplomatic than Suttle was doing the meeting.