The beginning of the end; or, the end of the beginning. Either way, we’ve been promised a decision Wednesday (8/15) by the Austin City Council on the proposal by Precourt Sports Ventures to bring a Major League Soccer team (presumably the Columbus Crew) to Austin. I’m not going to belabor things; everyone is ready for this portion of the proceedings to end. Make a decision…no more double dipping…let’s get this over with.

We’ve got 25-odd amendments that need to be discussed and voted on. Some will pass with the agreement of PSV. Some will fail. Some may pass without the agreement of PSV, and that’s where things may get hairy. But however PSV feels about how this vote goes, we’ve been promised a vote. So let’s get to it. I’ll be doingitlive with another live-blog (the last one being quite the scene).

My review of the proposed amendments.

Response to proposed amendments by PSV.

Time designations for my live-blog will be Pacific time, as I’m not doing math. Excuse any typos; I’ll try to correct as I go along.

6:18 AM (August 15): Good morning! About 45 minutes out. Andrew Erickson of the Columbus Dispatch has a good primer on what this all means.

6:33 AM: Not going to fully handicap the vote today, but here is how things stand for me at this moment:

Tovo’s move from the “yes” column has been the most shocking, but that’s due to Suttle’s awful performance. We’ll see if PSV can do anything to move her back, because I still think she is a potential yes vote. If the gender equity issue blows up, Flannigan could move “no” easily.

7:03 AM: People starting to file in, including the ATX Council. Remember, no public comment this time around.

7:14 AM: Of course these things never start on time, so we’ll see how this impacts the hard deadline for a vote at 9:30 AM. 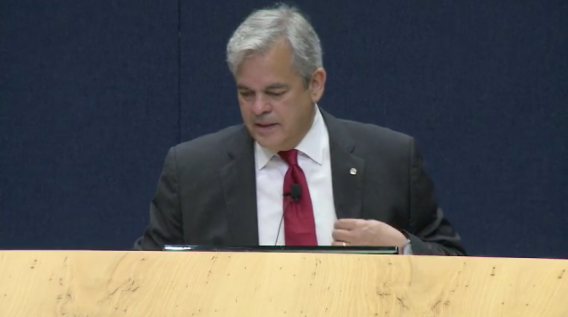 7:29 AM: There is another Term Sheet? It hasn’t been released.

7:30 AM: Check that, there have been no changes to the Term Sheet. Just the responses to the proposed amendments by PSV.

7:33 AM: There is a base motion to accept the Term Sheet with the amendments that have been agreed to by PSV only. Seconded by Flannigan.

7:39 AM: Garza wants PSV to donate the money to Capital Metro as outlined in her amendment, but if PSV doesn’t, they have to donate twice as much to the City (which would be then given to Metro).

7:45 AM: The discussion goes nowhere, so they move on.

7:48 AM: Casar proposes an amendment clarifying some language, and it’s approved.

7:52 AM: Tovo moves on to a discussion on her motion regarding the City controlling development around the stadium (Amendment 10a). 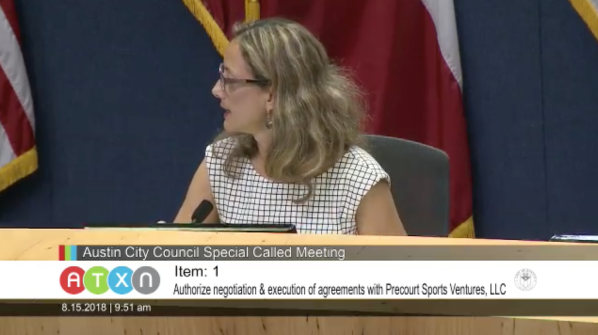 7:55 AM: Mayor Adler makes a motion that the issue of ancillary development be done by mutual agreement by both parties, with each party having discretion.

8:01 AM: Suttle and Adler are having a discussion on this issue, which they’ve obviously previously discussed and agreed to between the two of them. Other members of the Council (Tovo/Alter) don’t seem impressed. 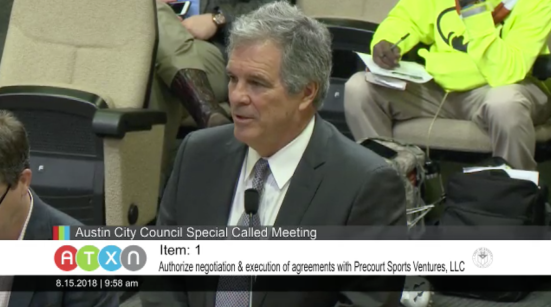 8:05 AM: Tovo is not going to agree to preclude the Council from having input (decision-making power) on ancillary development or public space.

8:07 AM: Kitchen suggests adding language that says the City Council has final approval.

8:10 AM: Kitchen and Pool getting into it a little bit here. Think Pool is going to lose on the  final approval issue.

8:13 AM: Once again, it appears that we are moving on without a resolution. 8:24 AM: Adler and Pool get into it on how long the amendment on ancillary development lasts for.

8:26 AM: Alter suggest adding the provision saying that PSV has 10 years to present a plan, otherwise it reverts to the City. Adler is not happy about that.

8:28 AM: Reading Kitchen’s body language, she does not like the mutual agreement clause regarding ancillary development.

8:33 AM: Ancillary amendment approved. Passes 8-1-2. Pool notes her objection on the record.

8:36 AM: Moving on to police/offsite costs (amendment 5), which Tovo is speaking to.

8:38 AM: Amendment passes easily to require PSV to pay police/offsite costs run by PSV, but the Legal Department has an issue. Seems to have been resolved.

8:42 AM: Adler summarizes the situation. Many proposed amendments were agreed to by PSV/MLS, but there are some that PSV has opposed. Discussion on those issues now.

8:43 AM: Back to the Garza amendment regarding PSV payments to Cap Metro. Seems like there may be a resolution on this.

8:45 AM: Alter wants to know what the remedy is if PSV default. Legal says the remedy is eviction. Alter is concerned with enforcement provisions short of eviction.

8:47 AM: Flannigan says it’s important that the Council exercises the ability to enforce the agreement. Even if that includes eviction. 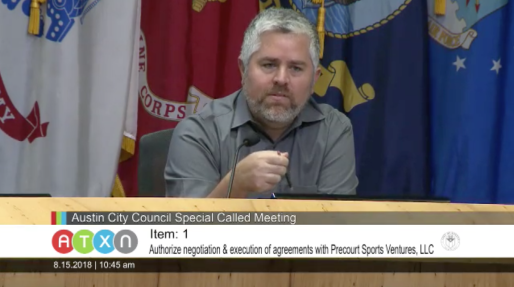 8:49 AM: Alter is concerned about the City being on the hook financially regarding the potential constructing of a Metro Rail station adjacent to the site (i.e. paying rent to PSV if it encroaches on their land).

8:52 AM: Cap Metro says that the funding will be very useful, even if it doesn’t build a Rail Station.

8:57 AM: Discussion on pedestrian crossing and the rail station. Deep in the weeds here.

9:02 AM: Adler says this is the best deal ever, and any other amendments could kill the deal.

9:03 AM: Alter wants a performance bond added to the agreement. Motion has been seconded. Discussion time.

9:07 AM: Troxclair moves her amendment to increase the rent. Seconded by Pool. Discussion ensures. Flannigan up first to chat about it.

9:09 AM: Flannigan won’t support the amendment based on the numbers. Adler says at some point, the Council needs to decide if they wants this deal. Brings up all of the money PSV is contributing.

9:12 AM: Adler is concerned the performance bond will kill the deal. Brings up benefits the stadium will bring. Troxclair notes there are other proposals on the table that bring more money in. Surprised that the alternatives were considered seriously. 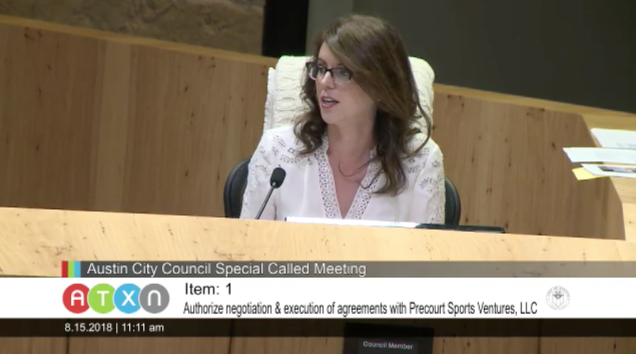 9:16 AM: Flannigan’s point is that he doesn’t think any of the other proposals would ever get built. Alter argues there was already a proposal ready to go. 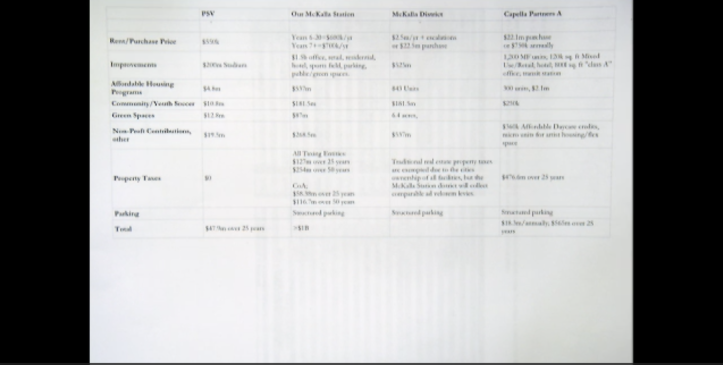 9:22 AM: Before the vote, Pool notes there was a RFP on a development that was never disclosed for discussion.

9:23 AM: Kitchen make a quick comment that certain developments on public land are not always taxable.

9:28 AM: Tovo says they’re not going to make 11:30 AM deadline, which is the least shocking thing in history.

9:29 AM: Tovo going through the rest of her amendments now. Amendment to require PSV to use reasonable efforts to ensure that spaces around stadium are open when the stadium is not in use. Passes.

9:31 AM: Alter wants the cap remediation by the City. Adler opposes based on the policy that the City delivers property remediated. Alter points out that the City of Miami is protected from remediation. Flannigan notes they are not developing 70+ acres. Motion fails 4-7.

9:36 AM: Discussion about whether they should vote up/down. Tovo strenuously opposes that, and wants to go through the amendments. Looks like we’re going to try to get through the ones that are easier.

9:41 AM: Tovo frustrated by the discussion on efforts to use local vendors. She just wants a plan to be offered reasonably early.

9:48 AM: Looks like it’s been resolved. Six month prior to opening, process to determine how local vendors will be prioritized. Passes 11-0.

9:52 PM: Pool with a motion regarding signage and restricting it somewhat. Adler opposes. Looks like it’s not going to pass.

10:00 AM: Tovo back on her motions. 1st one passes on minimum quality standards for the stadium.

10:05 AM: Discussion on connecting trials and requiring that PSV to explore it, and it passes.

10:06 AM: Question about how many amendments Tovo has left.

10:13 AM: After going through the remaining amendments, Adler thinks they can get through this in about 15 minutes and vote. I tend to agree. 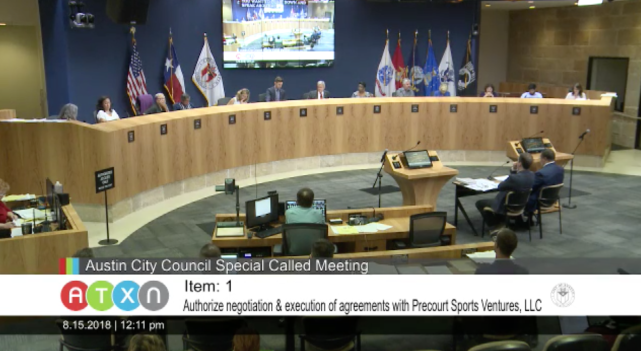 10:19 AM: Discussion on feasibility of rooftop issues and requiring PSV to work towards sustainability. Motion fails.

10:21 AM: Motion by Tovo to prevent PSV from grandfathering applications based on earlier city codes.

10:28 AM: Tovo and Adler can’t agree on PSV compromise that the date be as of today. Flannigan agrees with Tovo. Suttle and Adler are going to lose this one.

10:30 AM: Amendment to explore viewing parties is passed.

10:33 AM: Discussion over MLS TV broadcasts and blackouts. Pool is concerned about the games being viewed locally. Brings up the broadcast deal in Columbus, which is a shot at Precourt.

10:44 AM: Getting into the wetlands issues. Tovo wants some answers on jurisdictional issues. After a lengthy discussion, amended language has been passed.

10:55 AM: Talking about other watershed site amendments to require PSV to do certain things, which PSV says they cannot agree to at this time.

11:02 AM: This discussion on flood planes and site-plan reviews and the like is even going over my head.

11:12 AM: First amendment, which has to do with PSV and grandfathering applications. 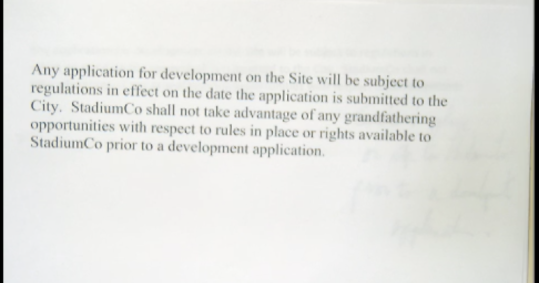 11:21 AM: More issues regarding performance bond, specific performance. I think Alter’s concern is that Precourt ups and takes off and Austin has an unusable asset.

11:27 AM: Adler is ready to have a final vote. Pool wants to delete “and execution.” Meaning that they want to hold off moving forward before they get everything.

11:38 AM: Casar points out his experiences going to Houston and Seattle as reasons for supporting the proposal.

11:46 AM: When the gender equity issues weren’t raised here today, that was probably a sign that this was going to pass.

11:52 AM: Alter goes through her list of reasons for voting now, which include her lack of trust in Precourt, the gender equity issues and the PSV partnership with Papa Johns.

11:55 AM: Flannigan goes into praising everyone for working relatively well together.

11:58 AM: Adler reiterates the fact that PSV is paying for the stadium, and looks forward to wearing team colors.

11:59 AM: Renteria confirms he is voting for the proposal. Tovo up now.

12:02 PM: Troxclair speaks to tell the crowd she appreciates their input. She still has the same reservations, but is excited about having a team in the city.