One of the outstanding questions in the SaveTheCrew saga (aside from the question of whether they’ll be saved) revolves around how MLS will handle the 2019 season with the fate of the team not resolved. PSV has been processing ticket payments from Crew fans, in anticipation of playing at Mapfre in 2019, though the fine print says that if the team does not play in Columbus, there will be a refund.

Settling aside the legal issues surrounding “notice,” this continues to keep things up in the air for 2019. While many have called on MLS to “rip off the band-aid” and just announce the move, MLS has thus far declined to do so, likely because they have not finalized the lease with Austin. And as I noted in my other story, the lease still has some time before it will be finished.

Which raises an interesting issue. The delay in resolving this case is surely wreaking havoc with MLS on a number of levels, two of which I’ll talk about here.

MLS typically releases their schedule within the first two weeks in January. Sometimes even earlier (November!). You have to go back to the 2010 and 2011 seasons to find a schedule announcement that went into February of the year the season was to be played, though the season didn’t start until April back then. MLS has complained that this lawsuit is hindering their ability to plan their season, and they’re right in an abstract sense.

As they don’t know if they’re going to be in Austin or Columbus for 2019, they’ve got a big variable that won’t let them complete their scheduling program. They’re likely preparing scenarios for either outcome. I’ve heard off-hand that they are likely to create two scheduling scenarios: One with a team in Columbus and one with a team in Austin, and essentially “plug-and-play.”

The “plug-and-play” scenario sounds cold; it makes it sound like these aren’t clubs so much as soulless puppets to be moved at the whims of their masters, which, yeah I know. It also presents and issue for the alignment of the conferences, since it would seem silly to split Texas teams into separate conferences, but they’ve done it before.

Teams are starting to secure dates at their facilities for next year however. And at some point in the next 6-8 weeks, MLS will probably come together to start putting a full schedule together. But without a ruling/settlement in Columbus, it’s possible we don’t get our schedule release until later than usual. Speaking of delays…

One interesting quirk here. The professional league standards imposed by U.S. Soccer have a number of requirements of each league, both globally and for each Division. One of the interesting (though little-noticed) ones has a requirement for leases. 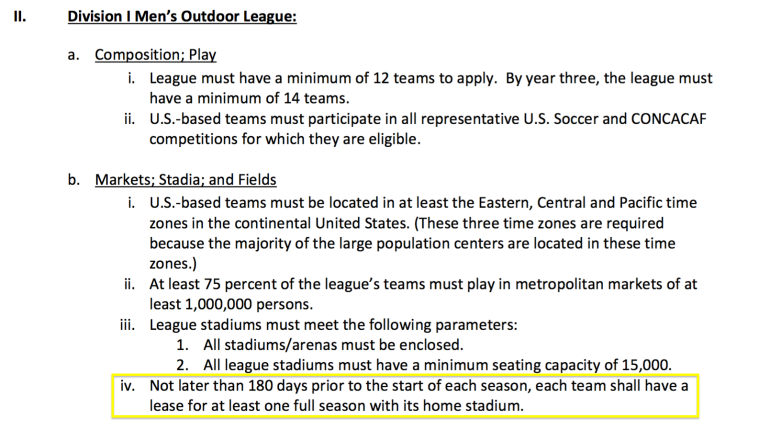 See any problems there? PSV/MLS quite clearly do NOT have a lease for the 2019 season with a home stadium in Austin. They don’t even have a home in Austin with which to sign a lease. Six months from today is April 8, so unless MLS is moving back the start time of the season to mid/late April, there is no way they’re going to be able to comply with this requirement. In fact, they’ve probably already noted their inability to comply with the 180-day deadline, since they were required to submit their annual sanctioning application by August 15. It probably partly explains in part why MLS was so anxious to get the deal over the line in August. So what does it mean?

Well, probably not a huge amount. The USSF PLS provide for a process by which waivers can be obtained when teams or the league cannot meet the requirements.

Soccer leagues have been requesting waivers from U.S. Soccer basically since the beginning of the modern era. While the MLS and/or USL specific waiver requests have never to my knowledge been publicly disclosed (and if the USSF would like to turn them over, I’d appreciate it), we know how they are typically submitted to the USSF based on some of the pleadings in the NASL/USSF/MLS lawsuit. I’ll pull one for illustrative purposes. In fact, I’ll post both the 2016 and 2017 waiver requests for NASL. 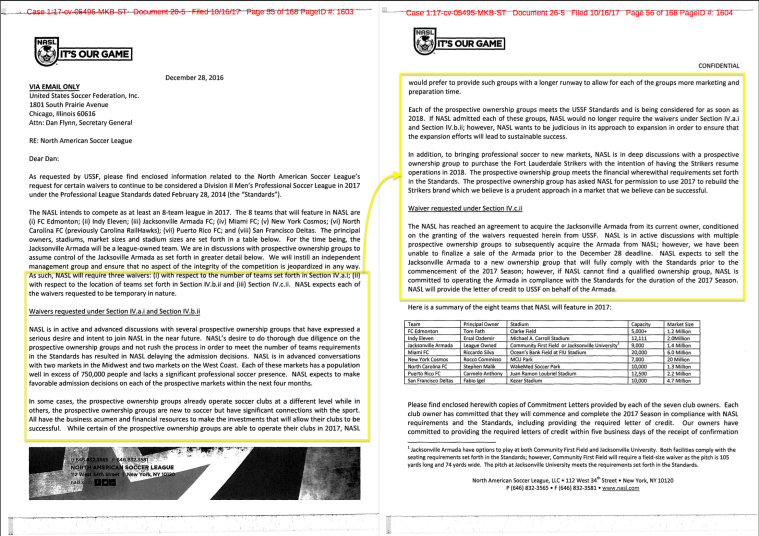 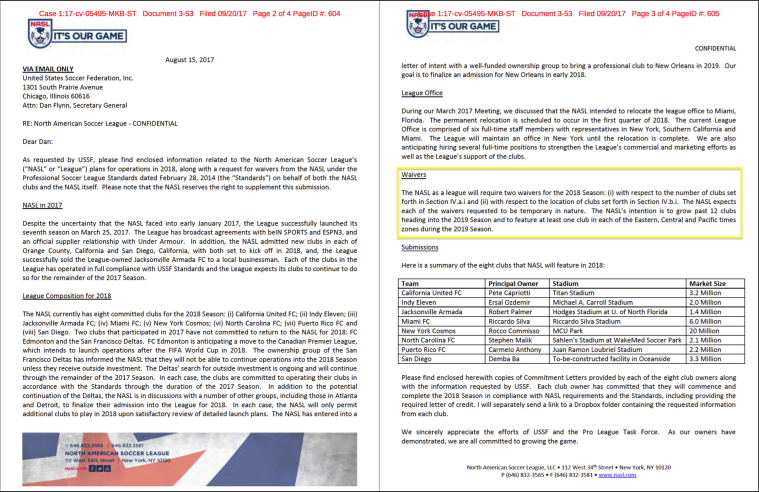 It should be noted that at the end of 2016, the NASL was an absolute mess. They were literally a fax away from going completely under. Frankly, USL wasn’t any great shakes either. In fact, the USSF Pro task force decided in January 2017 to sanction *neither* the USL nor the NASL for 2017. 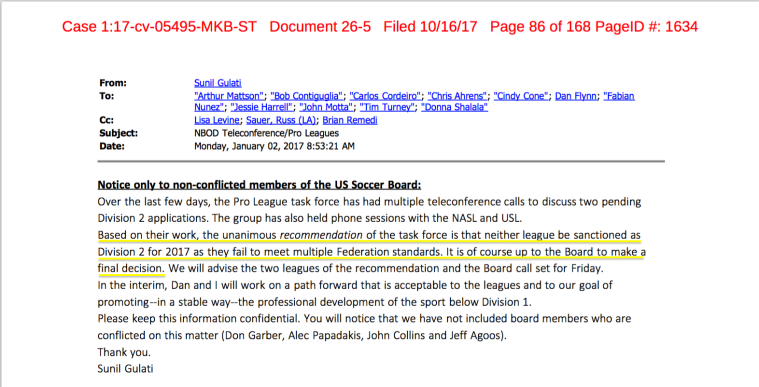 However, both leagues survived (to varying degrees) to play, notwithstanding their massive issues. It was just sort of the free-wheeling Calvinball that the USSF was doing at the time to try to save both leagues (and a whole division of soccer in the US).

So, is MLS in technical violation of the PLS for 2019, if they end up moving the Crew to Austin? Almost certainly, since they don’t have a lease with which to play in a primary stadium, and they had not procured a lease to play in a temporary stadium. Per contemporaneous reports at the time the Austin City Council approved drafting a formal lease agreement they’d not secured a temporary stadium. Based on conversations I’ve had with people in the know, it doesn’t appear they’ve done so yet, and considering they haven’t approved a move to Austin, I’m not sure how they could.

Will it matter? I…tend to think not; at least as it pertains to MLS’ operations. For one thing, this is only an issue if MLS moves to Austin. They currently have a valid lease in Columbus (that they intend not to use going forward, but we’ll put that aside) for 2019 after all. And if they do move to Austin 2019, it’s only with the lease/development agreement to build a new stadium, and while they’d have to play at a temporary site, and even though that lease necessarily be in violation of the 180-day requirement, they likely built that into their 2019 sanctioning request via a waiver. I don’t see why USSF would deny it, even if it would provide ammunition for the NASL in their lawsuit. And hey, what’s one extra bullet when you’re taking fire from all sides anyway?