In what should be a surprise to no one, less than 18 hours after trouncing the Houston Dynamo 4-1, there wasn’t a first-teamer who saw the field last night to be […]

In what should be a surprise to no one, less than 18 hours after trouncing the Houston Dynamo 4-1, there wasn’t a first-teamer who saw the field last night to be found on the training pitch this afternoon. A regen day for the starters will be followed by a couple of precious off-days for the team, as they have an extended break before they head out to Orlando for a Wednesday game next week.

With the starting XI inside, the pitch was full of academy, Sounders 2 and first-team players who didn’t see any time last night. Harry Shipp and Brad Smith continued their rehabilitation, and even though both are still out for at least a couple of weeks, they looked to be making good progress. 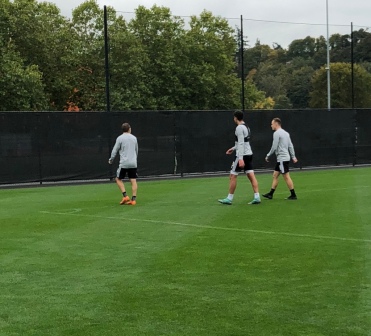 Speaking of progress, Jordan Morris continues to ever so slowly reintegrate himself into training with the team. He was back at it again on Tuesday, doing some on-the-ball drills with his teammates.

As always, temper your expectations about his return; we’re unlikely to have another update for a couple of weeks at least.

Coach Brian Schmetzer said the team spent the morning reflecting on the game, including some of the moments near the end of the game when Houston pressured the Sounders fairly relentlessly and got a goal. “We talked about some defending stuff; not taking Stef [Frei] for granted,” Schmetzer said. He also said, in response to a question I asked about the possession stats for the game (Houston actually out-possessed the Sounders), that the coaching staff took special note of that. “The discussion amongst the coaches this morning was, ‘why that happened?'” Schmetzer said. “If you looked at the piece of paper, statistically it looked pretty even.”

Of course, possession isn’t everything, especially when you win 4-1, but you could tell that it’s an issue that Schmetzer will want to address going forward, especially on the road. “Away from home, you need to be good in possession; can’t let home teams dictate to you,” Schmetzer said. “So we’ll make that a talking point.”