Well, here we are. The votes that will decide the future…of MLS expansion/relocation. Sort of. Polls are already closing around the country, and for those of you who won’t be […]

Well, here we are. The votes that will decide the future…of MLS expansion/relocation. Sort of. Polls are already closing around the country, and for those of you who won’t be hiding under your beds, or drinking yourselves silly. I’ll be following the important votes impacting MLS expansion and/or relocation. A short summary:

At stake is the David Beckham/Jorge Mas dream of developing the massive Miami Freedom Park. If vote passes, it will give the Beckham group the ability to negotiate a lease with the City of Miami. So this is but one (admittedly) hurdle in getting the development moving. There are lawsuits pending, but one step at a time.

Next up is the proposal from Landon Donovan’s group to redevelop the Mission Valley site (formerly the home of the San Diego Chargers) into a large development with a soccer stadium (sensing a pattern?). Polling on this issue has been pretty bleak for Landon’s group, but we’ll see what happens.

Finally, a large portion of the Austin City Council is up for election, including Mayor Adler, who led the charge to get the Term Sheet approved. That agreement is in the hands of the City Attorney, so whatever the results of the election, it doesn’t impact the agreement per se. Though if the pro-MLS2ATX council members are booted out, it could give the city pause.

Strap in…it could be a bumpy ride. Or this could all be over quickly; who knows? (Times are Pacific Standard; I’m not doing math).

4:10 PM: Also a reminder to check out my YouTube page, where I will be live streaming. Assuming I can figure it out.

5:08 PM: First votes on the Miami Freedom Park are in and it’s looking good at 59-41 to move forward to negotiate a lease.

6:21 PM: MiamiFreedomPark is one step closer to reality.

In front of a raucus crowd, @Jorge__Mas is calling the race and saying the #MFPvote will go in @InterMiamiCF‘s favor.

6:38 PM: District three in Austin (one of the yes votes who is up for reelection)

6:39 District eight in Austin (Troxclair’s old seat; she was a no and was basically the only conservative on the council).

6:58 PM: Mayor Adler wins another term. Big victory for him and a blow to the anti MLS2ATX forces.

7:14 PM: Only thing left really is the San Diego vote. It would be a shocker if Landon’s group can pull this over the line.

7:17 PM: This is why the Beckham/Mas deal is far from assured.

8:27 PM: Conversely, the SDSU (unfunded) measure is sailing to victory.

9:24 PM: It’s really too bad that the San Diego factions couldn’t work together. MLS in San Diego would have been really fun.

6:53 AM: Good morning! SoccerCity remains on track for a crushing, humiliating defeat. with about 70% of precincts reporting, the vote percentages haven’t changed.

7:06 AM: Meanwhile, the SDSU measure looks like it’ll hold on for a victory. 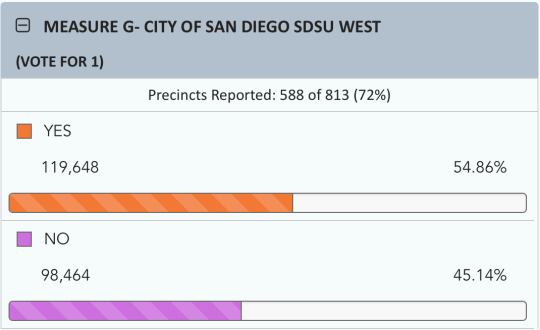 However, this doesn’t mean the development will be underway, as there doesn’t appear to be a funding mechanism to do it. Also, there is little chance that SoccerCitySD collaborates with SDSU. The parties hate each other, and SoccerCitySD has previously said that a stadium-only deal is cost prohibitive for them (they need to control the surrounding development). Thus SoccerCitySD, and MLS in San Diego, is likely dead.

7:16 AM: Wrapping up MLS2ATX news, Mayor Adler and Mayor Pro Tem Kathie Tovo cruised to victory. With Councilmember Renteria also likely to win, all of the pro MLS2ATX votes will return to the council. At worst, they retain their 7-4 margin. 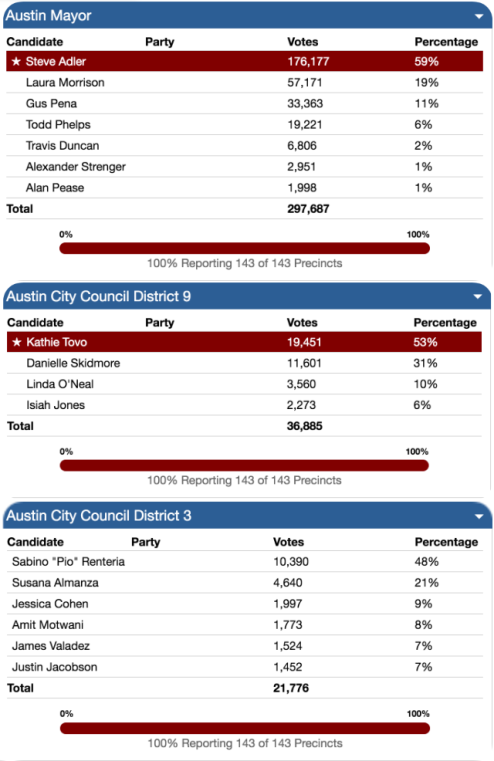 7:34 AM: Renteria and the other two council spots will go to a runoff, but with Renteria poised to win, the same seven votes will return at worst.

7:51 AM: Final vote margin for Miami Freedom Park: 60-40. Is that enough to get one of the “no” votes to support the development? And when will Beckham/Mas and MLS start playing hardball if they won’t?