Note: You can read my analysis of the Motion to Dismiss the appeal by the plaintiffs, and the response by PSV/MLS.

The final chess piece has been deployed in the plaintiffs’ motion to dismiss the Appeal. To briefly recap: The Order, which required PSV/MLS (and the plaintiffs for that matter) to comply with certain requirements, was appealed by the defendants on May 15. The plaintiffs filed a motion to dismiss later that month. PSV/MLS filed their response on June 1, and now we have the plaintiffs’ reply. Barring any other filings (which are generally prohibited by the court), we are now set for the Court to rule. If the Court grants the dismissal, the lower court order remains in effect, and the parties are required to comply (subject to further attempts to appeal or other legal maneuvers). If the dismissal is denied, we will move on to a full appeal of the Order, with briefing to be provided by the parties. I’ve gotten a copy of the reply brief, so let’s take a look.

The opening reiterates the principles of appeals in Ohio (which are…let’s call it unique). As you recall, I was less than enamored with the briefing from PSV/MLS. That said, I will analyze this brief on its own merits.

Plaintiffs argue PSV/MLS are trying to skip to the front of the line:

To start off, the Plaintiffs attempt to show that PSV/MLS are trying to do an end-run around the process to get the appeals court to rule on their substantive claims, before a trial court has the chance to weigh in.

In the PSV/MLS brief, they argued that even though the lower court Order did not specifically order an injunction (and the plaintiffs didn’t ask for one), the Order effectively serves as one. I thought the underlying premise of the PSV/MLS argument was sound (just because the Order doesn’t *say* injunction, doesn’t mean it doesn’t serve as one), but the problem for PSV/MLS from my point of view is even granting that, the Order at dispute still didn’t appear to me to qualify either way.

Plaintiffs argue that while declaratory judgment actions qualify as “special proceedings,” because the lower-court Order does not affect a “substantial right,” appeal must be dismissed:

Interestingly, plaintiffs essentially concede the argument from PSV/MLS that because this lawsuit involves a declaratory judgment (determining that the Modell Law applies to PSV/MLS), this qualifies as a special proceeding for purposes of granting an appeal. However, that isn’t only element that must be decided, as the plaintiffs note.

As to the argument that the substantive issues are still at play, that looks to be the case to me. Nothing regarding the application of the Modell Law has been adjudicated at this point, nor the defenses from PSV/MLS. If that’s the case, plaintiffs argue that an order such as the one entered in this case cannot be appealed.

Plaintiffs definitely spend quite a bit of time letting the court know that while this may involve a special proceeding, that is not enough for the court to grant the appeal in this case, which is a tacit acknowledgement that PSV/MLS scored a hit on the argument in their brief.

Fortunately if you’re the plaintiffs, it’s pretty clear that the Order at issue must also affect a substantial right. So the plaintiffs then set about attempting to take apart the argument from PSV/MLS that it does.

Plaintiffs argue the order does not affect a substantial right: 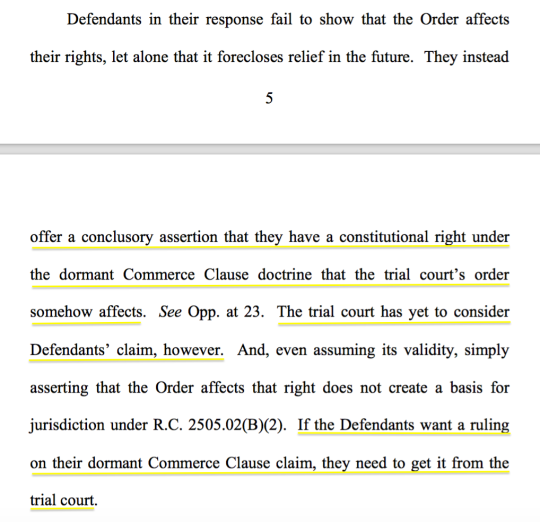 PSV/MLS’ argument was that the Order affected their Commerce Claim right to move the team, because it requires them to comply with the 90-day toll of the six-month waiting period. The problem being from a factual point of view, we have no idea when that waiting period expired, because PSV/MLS refuse to pin down when they say they gave notice. So this tolling period may be either premature, or moot. And PSV/MLS have not indicated they are intending to move any time soon. So their argument is basically an abstraction, and they haven’t asked the court to adjudicate the claim in any case, as the plaintiffs point out.

Plaintiffs argue that even if the Order does restrict some rights, appeal is improper where relief can be granted in the form of a future appeal:

Of course this assumes that any substantial rights have been affected, which the plaintiffs do not concede. But this argument covers the bases in the event the court were to determine that the Order did affect substantial rights. I’m not sure PSV/MLS have demonstrated that at this point besides.

As a brief review, when looking at provisional remedies, this is what we’re talking about:

“Provisional remedy” means a proceeding ancillary to an action, including, but not limited to, a proceeding for a preliminary injunction, attachment, discovery of privileged matter, suppression of evidence…

The bold sections are really what we’re looking at, and the plaintiffs have a number of arguments on this issue.

Plaintiffs argue the Order did not affect the rights of the parties under the Modell law:

So this is all true. The court didn’t order the parties to do anything, beyond meeting with the court to determine what financial documents should be turned over and what a bona fide purchaser means, and collaborating over what a non-disclosure agreement should entail. The issue regarding the turning over financial information may have raised eyebrows, but it’s not being turned over to the plaintiffs (and there is another issue we’ll get to later).

Plaintiffs argue PSV/MLS fears of contempt as a result of this Order are unfounded:

On of the more interesting arguments was that PSV/MLS were concerned that the Order would subject them to contempt (which implies they aren’t going to comply). The plaintiffs argue their fears are misplaced. 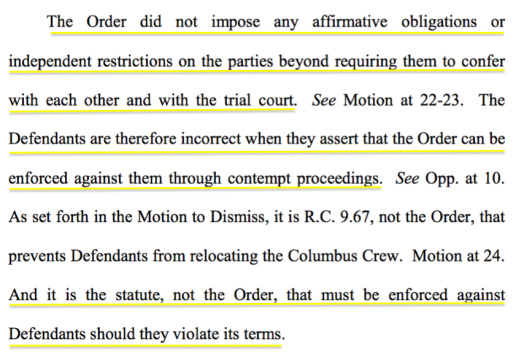 Again, this Order doesn’t prevent PSV/MLS from attempting to move. If PSV/MLS put the Crew in moving vans and set out for Austin tonight, the plaintiffs aren’t going to bring a contempt action under this Order; they’re going to seek a preliminary injunction under the Modell law. Even if PSV/MLS refuse to confer with the court or meet with the plaintiffs, the next step would be the Court entering orders on its own. So this argument from PSV/MLS does seem to be misplaced at this time.

Plaintiffs argue the Order causes no harm, and to the extent it may, it can be remedied after judgment: 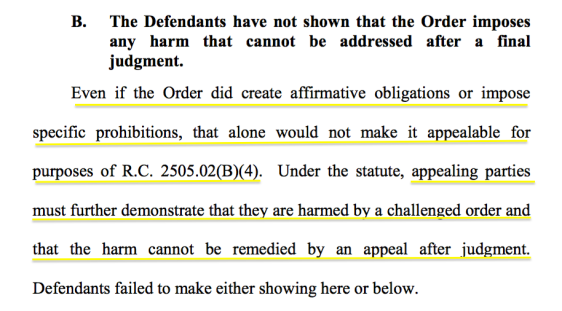 Obviously, the plaintiffs don’t concede that the Order either requires or prevents PSV/MLS from doing anything substantive, but they go on to argue that PSV/MLS can’t demonstrate they’ve suffered any harm that can’t be remedied later.

First, the plaintiffs address the portion of the Order from the court related to financial information to be sent to the court. This is where the plaintiffs really turn the screws to PSV/MLS. First, they use the previous statements of PSV/MLS against them.

Plaintiffs are absolutely correct here, and point out that it defies common sense to complain about the court taking them at their word when crafting the order. They then drop the rhetorical body-blow, arguing that the only way for PSV/MLS to establish any harm, is to admit they were lying, and had no intention of complying.

As I said, a pretty devastating rhetorical argument. The plaintiffs then argue that PSV/MLS had a chance to outline the harms they would incur in their previous pleadings, and have yet to demonstrate anything of substance.

Plaintiffs argue that PSV/MLS complaints about harm related to preventing preparation of relocation to Austin is belied by their actions:

I raised this point in my previous story. How can PSV/MLS argue the order hinders them from preparing to move to Austin, when they are preparing to move? As expected, the plaintiffs zeroed in on that. 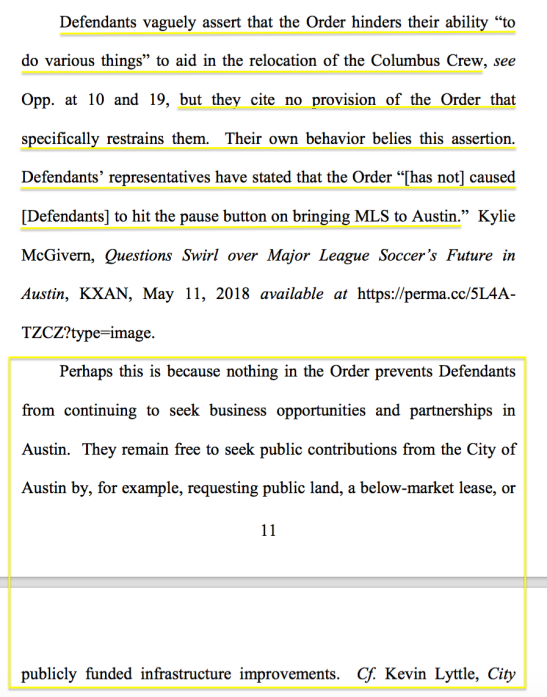 I’m mean, this is so demonstrably true, and I remain dumbfounded that PSV/MLS used it as an argument.

Plaintiffs argue that PSV/MLS’ failure out outline actual notice date to cease playing games at Mapfre means adequate remedy cannot be had at this time:

Essentially the theory here is that because PSV/MLS argue that one of the harms they are suffering is because of the tolling of the waiting period, there isn’t any harm since they’ve not argued for a specific notice date. 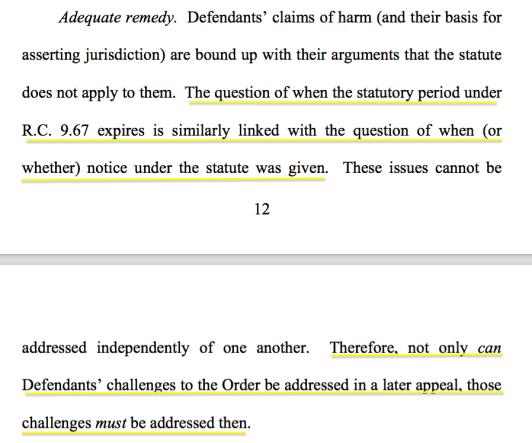 From here, the plaintiffs focus in on the one thing that has given me the biggest headache in this case: PSV/MLS’ allegedly providing “notice.” 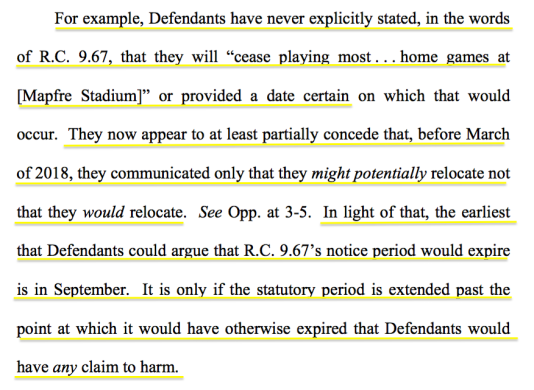 This is where PSV/MLS playing fast and loose with the notice period finally comes back to bite them. It’s obvious to me why they haven’t used the statutory language; they don’t want to further alienate Columbus fans and MLS fans generally by formally announcing they’re moving. They also don’t have a deal with Austin, so they don’t have anywhere to move there yet. That is all of course irrelevant in the context of complying with the Modell law; there is still an argument to be made (and I’m sure the plaintiffs are reserving it) that notice *still* hasn’t been given. And in that context, the 90-day toll isn’t causing PSV/MLS any harm, and won’t until the six-month period is determined to have expired. The plaintiffs summarize it thusly:

Plaintiffs argue that the PSV/MLS argument that enforcement of an unconstitutional statute causes irreparable harm, is unsupported by even their case-law:

Finally, and this is more of a technical argument, the plaintiffs argue basically that PSV/MLS’ argument is flawed, and the case-law they cite is irrelevant. Further they argue the statute at issue in the case PSV/MLS cited was previously ruled unconstitutional, unlike the Modell law. 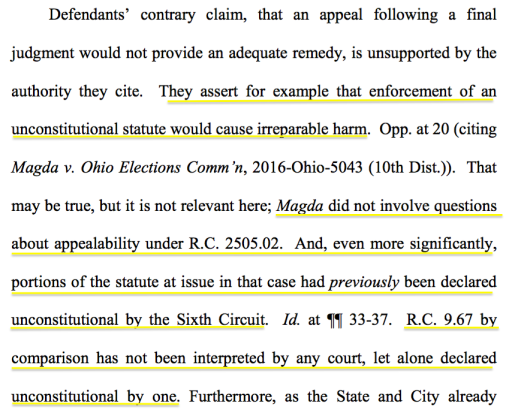 Basically, the argument is that the case PSV/MLS cite doesn’t apply to this situation at all.

To finish up, the plaintiffs point out that the order neither compels PSV/MLS to hand over financial documents (which they agreed to do anyway), nor forces them to draft a non-disclosure agreement. There may be a future order that does that, and the plaintiffs argue that *then* PSV/MLS can appeal.

So there is the reply briefing from the plaintiffs, and as you can guess, I’m more impressed with the plaintiffs’ briefing than the response from PSV/MLS. Handicapping things, I’d lay odds on this matter being dismissed, and the lower court Order being left to stand. I’m hearing that we could have a decision on this matter by the end of next week, if not a bit sooner. No guarantees of course; we know what happened in the NASL/USSF anti-trust case. Watch this space.